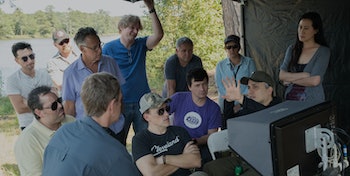 Trinh Tran is among the few people on Earth with more power over the Marvel Universe than Thanos. A development executive at Marvel Studios, Tran spent the last four years working behind the scenes of 2018’s Avengers: Infinity War and its sequel, 2019’s Avengers: Endgame, two gargantuan movies that have a combined gross of $4.8 billion at the global box office.

Tran didn’t work alone. Along with Marvel Studios President Kevin Feige, Marvel EVP of Production Victoria Alonso, directors Joe and Anthony Russo, and screenwriters Christopher Markus and Stephen McFeely, and many more, you can say she’s part of the Avengers of Hollywood: A group of remarkable people who pulled off an incredible feat no one else could.

But like the Avengers, Tran, has a specialty: “To offer a different perspective,” she tells Inverse.

"Sometimes in the room, I’m the only female sitting there.

An immigrant who came to the U.S. from Saigon, Vietnam as a child with her family, Tran says her perspective as a woman of color is how she offers new insight into the movie-making process, offering ideas her colleagues maybe couldn’t imagine.

“The Russos, Markus and McFeely, they’re like family to me,” she says. “I’ve worked with them on the last four projects together. But sometimes in the room, I’m the only female sitting there, and I think there’s a different perspective coming from where I am. I might think [of something] that doesn’t dawn on them.”

In a phone conversation as part of the Blu-ray and DVD release for Avengers: Endgame, Trinh Tran spoke to Inverse about the importance of diversity in Marvel’s Phase Four, as well as some fun insight into one of the biggest movies of all time.

You and your fellow producers are like the Avengers behind the scenes. What do you feel you brought to the table that your colleagues did not?

I love that you mention we’re the Avengers. We should have a poster of us posing. I spent four years on Infinity War and Endgame, we shot back to back. To work with the Russo brothers and Markus and McFeely, we’re family. We work so well, I’ll blurt out something crazy and they’ll look at me, but that will start a conversation and veer off into a different direction that maybe none of them thought. Coming from where I am, it’s just a different perspective to the room.

Marvel’s new movies in “Phase Four” announced at Comic-Con can be best described as “diverse.” What excites you about Phase Four’s visibility of women and superheroes of color, and what makes it important for Marvel?

Female representation, the diversity of it all, is very important because this is the world we live in. There’s so many different people out there and in order for us to relate to them, we have to make movies that are different. We can’t always be about one race or gender. That’s not the way to connect with the world.

I’m looking forward to Black Widow getting her own movie next year, Shang-Chi getting his due. This is the first step to more diverse characters and franchises. I am hoping for more down the line. We have so many characters in the Marvel Universe, it’s a matter of picking which one makes sense to the MCU. In thinking about the future of the MCU and how all those characters are gonna connect, diversity is crucial in our future.

I think we’re heading towards the right direction. Ten years ago when we started making these movies, you probably don’t see much of that.

Were you part of the decision to cast Simu Liu as Shang-Chi? What made Simu “Shang-Chi” in the eyes of Marvel?

I’m not involved. It’s funny, when we did the announcement, I had so many people texting me, “Are you involved in Shang-Chi?” I would have loved to, but unfortunately as that started developing I was still on Endgame, so timing-wise it didn’t work out. I wasn’t a part of that decision.

There’s a lot of secrets in making Marvel movies. It’s well-known that during filming for Tony Stark’s funeral, the actors were told they were at a wedding. At what point did they realize the truth?

It was on the day of, so we don’t spoil it in case somebody slips. From that day on we had to keep everything mum.

I mean, I’ve been to some pretty mournful weddings.

Can you imagine? We know what we should have done, we should have just told them, “You’re attending a wedding, but be sad about it.” You know, maybe it’s not the wedding you thought. That could have been a way out.

It must have been a tricky getting everyone together.

Everybody has schedules and multiple things going on, and to have them all under one roof was pretty amazing. And hard. Really, just shooting two big movies — all of 2017 was dedicated to filming, and the second half of the year was grueling as we were posting Infinity War while shooting Endgame while doing additional photography all at the same time.

The portal opening [in Endgame] we had all of pretty much the MCU appear on those couple days to shoot. It was a big challenge because we pretty much had all of Hollywood in Atlanta on that set.

What’s it like to make more money than Avatar?

It’s crazy. Just being part of the journey to make Endgame has been a reward itself, but to see audiences embrace how much we love this movie, and to get it to number one, has been spectacular. Words can’t describe how I’m feeling. We’re all just happy people are embracing it as much as we’ve dedicated the years we spent getting this movie to where it is.

Your role throughout your time at Marvel has changed, but you started with 2008’s Iron Man. What’s it like for you now to be part of a franchise without Iron Man around?

It’s really sad. I started off with Iron Man. I wasn’t a huge comic book reader but I remember sitting in that room in post-production. It was the first time I watched Iron Man and to this day he’s still one of my favorite characters. Robert became Tony Stark in front of my eyes.

I knew when I watched it was something special, and I wanted to make these movies because I fell in love with that character. Just being a part of Tony’s journey from beginning to end was remarkable because I felt like I was part of his journey. It’s sad, but I am happy it’s allowing for more opportunities with these new characters to be a part of the MCU.

Are there any hints about Phase Four in Avengers: Endgame that you couldn’t talk about before Comic-Con?

There’s always tidbits of stuff that if you read into it. Maybe something will come up. I think if you look closely, we like to say that, Phase Four and the future, there’s great characters and different franchises we look forward to. We are ending Infinity Saga with Endgame, that’s the end of the old and we look forward to the new. There’s always a hint at what’s to come in the future. It just depends on where you look.

Avengers: Endgame is available now on Digital HD and on Blu-ray and DVD on August 13.