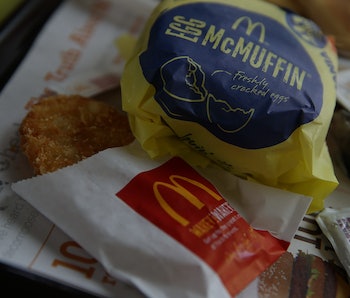 Ding, dong: The 10:30 a.m. cutoff is dead. The Golden Arches beam with more greasy light on this day. McDonald’s has announced that, beginning October 6, it shall offer breakfast items all goddamn day and night at its more than 14,300 U.S. locations. The Wall Street Journal reports that a majority of franchisees voted in favor of the move last week and that a leadership council affirmed the decision today.

There are some logistics that different restaurants will have to figure out — by adding equipment, mostly — but The Journal says that they will, at least, initially offer the following: “sausage burritos, hot cakes and, depending on the region, Egg McMuffins or biscuit sandwiches.” Alright, that’s not everything, but we’ll take it. In an interview, my stomach — hungover around noon on a Sunday — was quoted as saying, “Hell yeah.”

More like this
Mind and Body
8.14.2022 3:00 PM
Cultivating 2 habits in your 30s may boost mental health in old age
By Sarah Sloat
Science
8.13.2022 2:00 PM
What makes mold edible? A food safety expert breaks it down
By Elana Spivack
Mind and Body
8.7.2022 10:00 AM
Nordic Diet vs. Mediterranean Diet: The health benefits of eating like a Viking, explained
By Duane Mellor, Ekavi Georgousopoulou and The Conversation
Related Tags
Share: