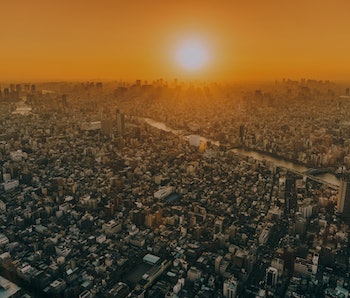 New reconstructions of Earth’s temperature over the past 2,000 years, published last week in Nature Geoscience, highlight the astonishing rate of the recent widespread warming of our planet.

We also now have a clearer picture of decade-to-decade temperature variations, and what drove those fluctuations before the Industrial Revolution took hold.

Contrary to previous theories that pre-industrial temperature changes in the last 2,000 years were due to variations in the sun, our research found volcanoes were largely responsible. However, these effects are now dwarfed by modern, human-driven climate change.

Without networks of thermometers, ocean buoys, and satellites to record temperature, we need other methods to reconstruct past climates. Luckily, nature has written the answers down for us. We just have to learn how to read them.

Corals, ice cores, tree rings, lake sediments, and ocean sediment cores provide a wealth of information about past conditions — this is called “proxy” data — and can be brought together to tell us about the global climate in the past.

Teams of scientists around the world have spent many thousands of hours of field and laboratory work to collect and analyze samples, and ultimately publish and make available their data so other scientists can undertake further analysis.

With this unique dataset in hand, our team set about reconstructing past global temperature.

We scientists are notoriously skeptical of our own analysis. But what makes us more confident about our findings is when different methods applied to the same data yield the same result.

In this paper we applied seven different methods to reconstruct global temperature from our proxy network. We were astounded to find that the methods all gave remarkably similar results for multidecadal fluctuations — a very precise result considering the breadth of the methods used.

This gave us the confidence to delve further into what drove global temperature fluctuations on decadal timescales before the Industrial Revolution really took hold.

What Happened Before Human-Induced Climate Change?

Our study produces the clearest picture yet of Earth’s average temperature over the past two millennia. We also found that climate models performed very well in comparison, and they succeed in capturing the amount of natural variability in the climate system — the natural ups and downs in temperature from year-to-year and decade-to-decade.

Using climate models and reconstructions of external climate forcing, such as from volcanic eruptions and solar variability, we deduced that before the Industrial Revolution, global temperature fluctuations from decade to decade in the past 2,000 years were mainly controlled by aerosol forcing from major volcanic eruptions, not variations in the sun’s output. Volcanic aerosols have a temporary cooling effect on the global climate. Following these temporary cooling periods our reconstructions show there is an increased probability of a temporary warming period due to the recovery from volcanic cooling.

There are, of course, natural changes in Earth’s temperature from decade to decade, from century to century, and also on much longer timescales. With our new reconstructions, we’re also able to quantify the rate of warming and cooling over the past 2,000 years. Comparing our reconstructions to recent worldwide instrumental data, we found that at no time in the last 2,000 years has the rate of warming been so high.

In statistical terms, rates of warming during all 51-year periods from the 1950s onwards exceed the 99th percentile of reconstructed pre-industrial 51 yr trends. If we look at timescales longer than 20 years, the probability that the largest warming trend occurred after 1850 greatly exceeds the values expected from chance alone. And, for trend lengths over 50 years, that probability swiftly approaches 100%. So, what do all these stats mean? The strength of the recent warming is extraordinary. It is yet more evidence of human-induced warming of the planet.

But Hasn’t There Been Natural Climate Change in the Past?

Our understanding of past temperature variations of the Earth contributes to understanding such fundamental things as how life evolved, where our species came from, how our planet works and, now that humans have fundamentally altered it, how modern climate change will unfold.

We know that over millions of years, the movement of tectonic plates and interactions between the solid earth, the atmosphere, and the ocean, have a slow effect on global temperature. On shorter (but still very long) timescales of tens to hundreds of thousands of years, our planet’s climate is gradually influenced by small variations in the geometry of the Earth and the sun. For example, small wobbles and variations in the Earth’s tilt and orbit.

From the Last Glacial Maximum, about 26,000 years ago, when huge ice sheets covered large parts of the Northern Hemisphere landmass, Earth transitioned to a 12,000-year warm period, called the Holocene.

This was a time of relative stability in global temperature, apart from the temporary cooling effect of the odd volcano. With the development of human agriculture, our prosperity and population grew. Before the Industrial Revolution, Earth had not seen carbon dioxide concentrations above current levels for at least 2 million years.

Following the industrial revolution, warming commenced due to human activity. With a clearer picture of temperature variations over the past two millennia we now have a better understanding of the extraordinary nature of recent warming.

It is up to all of us to decide whether this is the kind of experiment we want to run on our planet.

I would like to gratefully acknowledge the leader of this study, Raphael Neukom, and my fellow co-authors from the PAGES 2k Consortium. We also owe the teams of proxy experts much gratitude. It is their generous contribution to science and to human knowledge that has allowed for this, and other palaeoclimate compilation and synthesis studies.

This article was originally published on The Conversation by Ben Henley. Read the original article here.

More like this
Science
Dec. 3, 2022
The wreckage of ancient hurricanes could predict future storms
By Tyler Winkler and The Conversation
Science
November 27, 2022
Can I feed my pet only dry food? Why the answer is different for cats and dogs
By Tara Yarlagadda
Science
November 26, 2022
Are you ready for extreme snow?
By The Conversation and Michael A. Rawlins
Related Tags
Share: