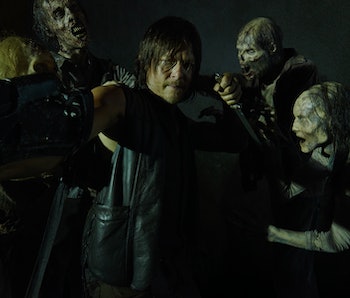 Television showrunners, those ninjas-of-all-trades, are the brains and backs of our current Golden Age of TV. Any show worth its streaming bandwidth has to be epic in scope, compelling in its stories. When showrunners lack the right vision — or can’t complete the real-life steeplechase the job demands — they depart over “creative differences.”

If great TV is to survive the next few years, this can’t keep happening.

Variety surmises that the industry is hitting a snag: lots of shows, not enough people with the chops to run ‘em. The demand means inexperienced writers and producers are getting promotions into the hardest job in showbiz. When those newly minted showrunners wash out, executives have to reach once again into the ranks of the unready. It’s a feedback loop that has serious ramifications.

“Everyone is trying to jockey for position,” said John Landgraf, chief of FX Networks. “We’re playing a game of musical chairs, and they’re starting to take away chairs.”

An agent echoed this view to Variety: “The business is going through some growing pains in terms of scarcity. There’s more to go around than people available.”

And it’s not healthy for a TV show to swap leaders mid-season. This isn’t some shift change at the Chipotle at the mall, but more like policy makers promising to uphold decisions only to bail before they can vote.

“When a showrunner is let go because the network or studio decides the creative direction of the show isn’t working in the episodes they’ve seen so far — that’s disastrous. It means all the work you’ve done but haven’t shot yet is all going to be thrown away,” said Bill Lawrence, the comedy honcho who has juggled multiple series in recent years, including NBC’s Undateable and CBS actioner Rush Hour for the coming midseason. “It’s very rare that a drama or comedy can go on a different creative course successfully without taking three months off. By the time they fire the showrunner, the die is cast and it speaks to disaster.”

Perhaps the answer to solving this crisis is simple: Keep it simple.

If newbies are given the job reserved for experts, the difficulty setting should be turned down a notch. While not advocating for dumber, simpler stories, the storytelling need not be as complex as some feel as it should.

Though the action choreographers of 1968’s The Green Hornet undoubtedly put out a lot of work and no one can ever be as gifted as Bruce Lee, the framing and complexity of their work pales to the demanding, cinematic style found today. For a lesser showrunner, this could prove beneficial.

We don’t even have to go so old-school for great lessons in keeping it simple. The very first scene in The Walking Dead is a crash course in Elegant Simplicity 101.

To have emotional resonance, shows don’t necessarily need the production detailing of Rome, or the Carmen Sandiego-worthy location shoots of Game of Thrones, or the expansive cast of Lost. If television is to thrive into the future, the key to its survival lies in its past. Great TV shows from yesteryear offer glimpses of keeping things smart, exciting, and lean.