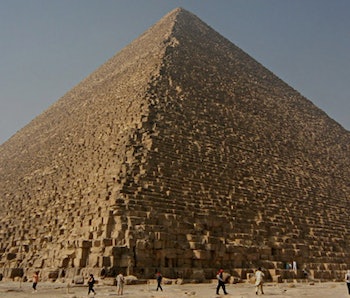 An asteroid almost as big as the Great Pyramid of Giza will whizz past Earth – closer than the Moon – on Wednesday. It will pass us at a minimum distance of roughly 219,748 miles, which may sound like a long way, but in cosmological terms, that counts as a close scrape.

Called 2019 OD, the asteroid is 394 feet wide and is traveling at a speed of 42,882 miles per hour. It was spotted just three weeks ago and is expected to hurtle past our little blue-green planet at 9:31 a.m. Eastern. This is the 31st known asteroid to fly by Earth within 1 LD since the start of the 2019 and the largest.

2019 DO is an Apollo-class NEO (near-Earth object) and was first observed at ATLAS-HKO, Haleakala, Hawaii. However, there’s no reason to panic: This asteroid hasn’t been classified as hazardous by NASA and poses very low risk of hitting the Earth.

But 2019 OD isn’t the only asteroid that’s been predicted to hurtle past our homeworld this week.

Asteroid 2015 HM10 is a second largest of the three and could be up to 361 feet wide, will also approach towards the Earth on Wednesday. It’s traveling at 21,240 miles per hour, but will be just under three million miles away when it passes our planet at around 9:30 a.m. Eastern.