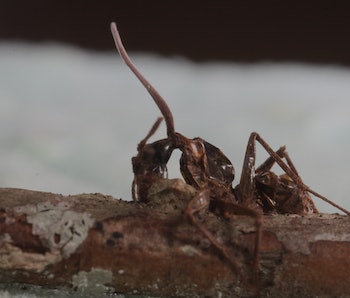 Zombification may be the stuff of science fiction for humans, but for insects, getting zombified is a very real threat. Scientists and Planet Earth afficionados may recall the cases of ants found clinging to high leaves and twigs with a strange, nefarious fungus sprouting from their corpses. This fungus, called Ophiocordyceps unilateralis, may be metal as heck, but it’s becoming less of a mystery. Thanks to a paper published Wednesday, we know a little more about it.

A team of scientists at Pennsylvania State University may have made big step forward in explaining exactly how this fungus forces the ant into a “death grip” — the final, climactic action that an infected carpenter ant takes before it dies. In their paper published in The Journal of Experimental Biology, they showed that cells from O. unilateralis sensu lato (the specific type of fungus that infects carpenter ants) can deeply penetrate the ant’s jaw muscles and communicate with one another.

Once the ant bites, they observed that those muscles are in a state of hypercontraction, suggesting that they performed one, final mega contraction before the host eventually expired. But what exactly causes that final act is still a bit of an open question.

To understand the significance of these findings you have to know exactly how an ant is “zombified” by O. unilateralis. After the ant is infected, the fungus begins to grow inside the body, evading the immune system and leaving the brain intact. All the while, it forms a dense, interconnected network, explains Colleen Mangold, Ph.D., a postdoc at Penn State and the study’s lead author.

“Despite the abundance of fungus, for the most part, the ant remains relatively healthy until the tail end of infection when these distinct changes in host behavior occur,” Mangold tells Inverse.

Then during that tail end, around the three week mark, things get very weird. In the early hours of the morning or evening, the ant ascends to a high point on a plant, latches on (that’s the death grip part), and then slowly dies. Concurrently, a fungal fruiting body — basically a mushroom — emerges from the back of its head, where it can rain spores down upon future victims.

Mangold’s work leaves us with two hypotheses to explain what makes that final contraction happen.

Mangold explains that there’s a high density of fungal infection around muscle cells. This suggests the fungus could be excreting something locally, or causing muscle cells to excrete something that triggers that initial chomp. She also found signs of secreted factors in the tissue of the ants she studied, supporting this hypothesis.

But she also noticed that the fungus left the ant’s neuromuscular junctions intact, which opens up another competing idea.

"We can’t discount the possibility that muscle contraction may be caused by a signal from the brain."

Neuromuscular junctions are the places where motor neurons and muscle cells come together to exchange chemical messengers. When that messenger reaches a muscle cell, it triggers a contraction. So the fact that the junctions are left intact by the fungus suggests that that final chemical signal may also come from the ant’s brain — though O. unilateralis is likely controlling that process.

“We still don’t know which hypothesis is true,” says Mangold. “But by understanding that the neuromuscular junctions appear to remain intact at the time of the biting behavior, we can’t discount the possibility that muscle contraction may be caused by a signal from the brain.”

Regardless, Mangold has pushed us one step closer to understanding one of nature’s strangest zombification techniques — though it’s probably of small comfort to the thousands of unsuspecting ants who are left swinging in the tropical breeze.

Abstract: There are numerous examples of parasites that manipulate the behavior of the hosts that they infect. One such host–pathogen relationship occurs between the ‘zombie-ant fungus’ Ophiocordyceps unilateralis sensu lato and its carpenter ant host. Infected ants climb to elevated locations and bite onto vegetation where they remain permanently affixed well after death. The mandibular muscles, but not the brain, of infected ants are extensively colonized by the fungus. We sought to investigate the mechanisms by which O. unilateralis s.l. may be able to influence mandibular muscle contraction despite widespread muscle damage. We found that infected muscles show evidence of hypercontraction. Despite the extensive colonization, both motor neurons and neuromuscular junctions appear to be maintained. Infection results in sarcolemmal damage, but this is not specific to the death grip. We found evidence of precise penetration of muscles by fungal structures and the presence of extracellular vesicle-like particles, both of which may contribute to mandibular hypercontraction.