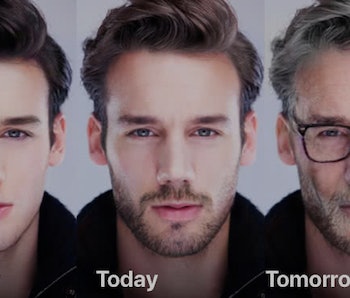 This week, celebrities ranging from the Jonas Brothers to Ludacris gave us a peek into what they might look like in old age, all with the help of artificial intelligence. But how exactly has FaceApp taken a stable of celebrities and transformed them into elderly versions of themselves? The app may be powered by A.I., but it’s informed by the biology of aging.

FaceApp was designed by the Russian company Wireless Lab, which debuted the first version of the app back in 2017. But this new round of photos is particularly detailed, which explains the app’s resurgence this week. Just check out geriatric Tom Holland, replete with graying hair and thickened brows — and strangely, a newfound tan.

What tweaks does FaceApp make to achieve that unforgiving effect? On the company’s website, the explanation is fairly vague: “We can certainly add some wrinkles to your face,” the team writes. But a closer look at the “FaceApp Challenge” pictures shows that it does far more than that.

FaceApp has been tight-lipped about how its software works — though we know it’s based on a neural network, a type of artificial intelligence. Inverse has reached out to FaceApp for clarification about how the company achieves its aging effects and will update this story when we hear back.

Regardless, scientists have been studying the specific markers of facial aging for decades, which give us a pretty good idea of what changes FaceApp’s neural network takes into consideration when it transports users through time.

Before there was FaceApp, there was Rembrandt, a 17th-century Dutch painter who had a thing for highly unforgiving self portraits, about 40 of which survive today.

In 2012, scientists in Israel performed a robust facial analysis on Rembrandt’s work that was initially intended to separate the real paintings from forgeries. But their paper, published in The Israel Medical Association Journal, also incorporated “subjective and objective” measures of facial aging that they used to measure the impacts of time on the artist’s face. These measures have some applications to our modern-day FaceApp images.

Their formula focused on wrinkles that highlighted Rembrandt’s increasing age. Those included forehead and glabellar wrinkles — the wrinkles between the eyes that show up when you furrow your brow but seem to stick around later in life. They also analyzed accumulations of loose skin around the eyelids, called dermatochalasis (which creates “bags”), and nasolabial folds, which are the emergence of “smile lines” between the nose and mouth.

Fortunately, Rembrandt’s commitment to realism also gave them bigger aging-related features to work with. They quantified his “jowl formation” and the development of upper neck fat. But the most powerful metric was their “brow index,” which, over time, documented a descending brow line in the artist. Rembrandt’s eyebrows really descended starting in his ‘20s but leveled out by his ‘40s.

We can see some of the similar markers in these current FaceApp images. Just look at the aged Tottenham Hotspur squad, complete with furrowed brows, eye bags, and descending jowls — just like Rembrandt.

What Makes a Face Look Older?

Wrinkles notwithstanding, there is another way that FaceApp may be working its magic. There’s some evidence that perceived age is partially linked to facial color contrast.

Also, in 2012, a team of scientists in France and Pennsylvania demonstrated the impact of contrast in a series of experiments on images of female, caucasian faces. Faces with high color contrast among facial features (eyes, lips, and mouth, for example) and the skin surrounding them tended to appear younger than faces with low contrast in those areas.

In 2017, members of that team published another study suggesting that contrast holds information about age across ethnic groups. There, they found that color contrast of facial features decreased with age across groups, but most significantly in Caucasian and South Asian women. Contrast decreased with age in Chinese and Latin American women, too, but not as strongly.

Importantly, they also note that when you artificially enhance contrast, faces tend to look younger as well, suggesting that contrast’s relationship to age perception is strong.

“We have also found that artificially increasing those aspects of facial contrast that decrease with age in diverse races and ethnicities makes the faces look younger, independent of the ethnic origin of the face and the cultural origin of the observers,” they write.

Now that we know all this, let’s take another look at those photos of Tom Holland. There does seem to be some kind of color manipulation going on, in addition to the obvious wrinkling of his skin, though it’s unclear if maybe the photo was altered after FaceApp was applied.

Still, color contrast and specific physical features (like “jowl formation”) are factors that may be contributing to FaceApp’s seemingly magical transformation of age — which, for now, has captivated the internet.