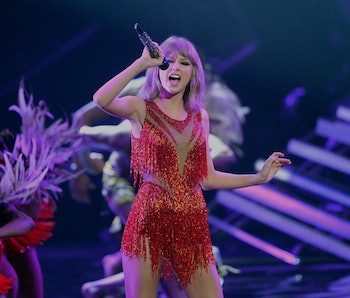 America is the king of Pop.

Per this Atlantic Cities report, UCLA Ph.D student Patrick Adler has developed a database that tracks 258 of the world’s top-selling pop stars based on geography from 1950 to 2014. Give the flag a nice long salute, ‘cause we crank out a lot of stars to go with our stripes.

Since the middle of last century, 72.2 percent of top-selling pop musicians were born in the States, with the UK lagging way behind with 15.6 percent. Canada chipped in 6 percent of pop stars, and all other countries accounted for less than 1 percent, in the data collected.

The United States dominated from early on, accounting for nearly 100 percent of pop stars in the 1950s, when the genre was really invented. In the ‘70s and ‘80s, when the generational influence had ample time to cross the pond, the UK dominated the charts — the British Invasion, it was a thing. Record labels that cranked out hits settled to a long-running 40-30-30 split between New York, Los Angeles, and London.

Since that time, the numbers have steadily shifted between those three locations. The share of stars based in all those cultural capitals are near record (heh) lows in the 2010s. Granted, the decade is only half over, and a gaggle of new London- or L.A.-based teeny boppers could be poised to burn up the charts straight out of the womb, but the data dip is telling.

Pop looks to becoming more geographically democratic. As the internet has blown up record labels generally, it has made it easier for talent to get noticed outside the traditional hubs. An independent electro-pop artist who streams his EP on SoundCloud, or an indie-pop band that posts their newest bubblegum record on Bandcamp can reside almost literally anywhere. Next thing you know, their hits will be tapped for a clip in MTV’s next reality show or the latest Pitchfork track review.

The future of this kind of data set is bright for creative people in places like Boston, D.C., Seattle, Detroit, Atlanta, Houston, Chicago. No longer, perhaps, does an artist need to be linked to one of the traditional big three cities for a label to put him on the map.