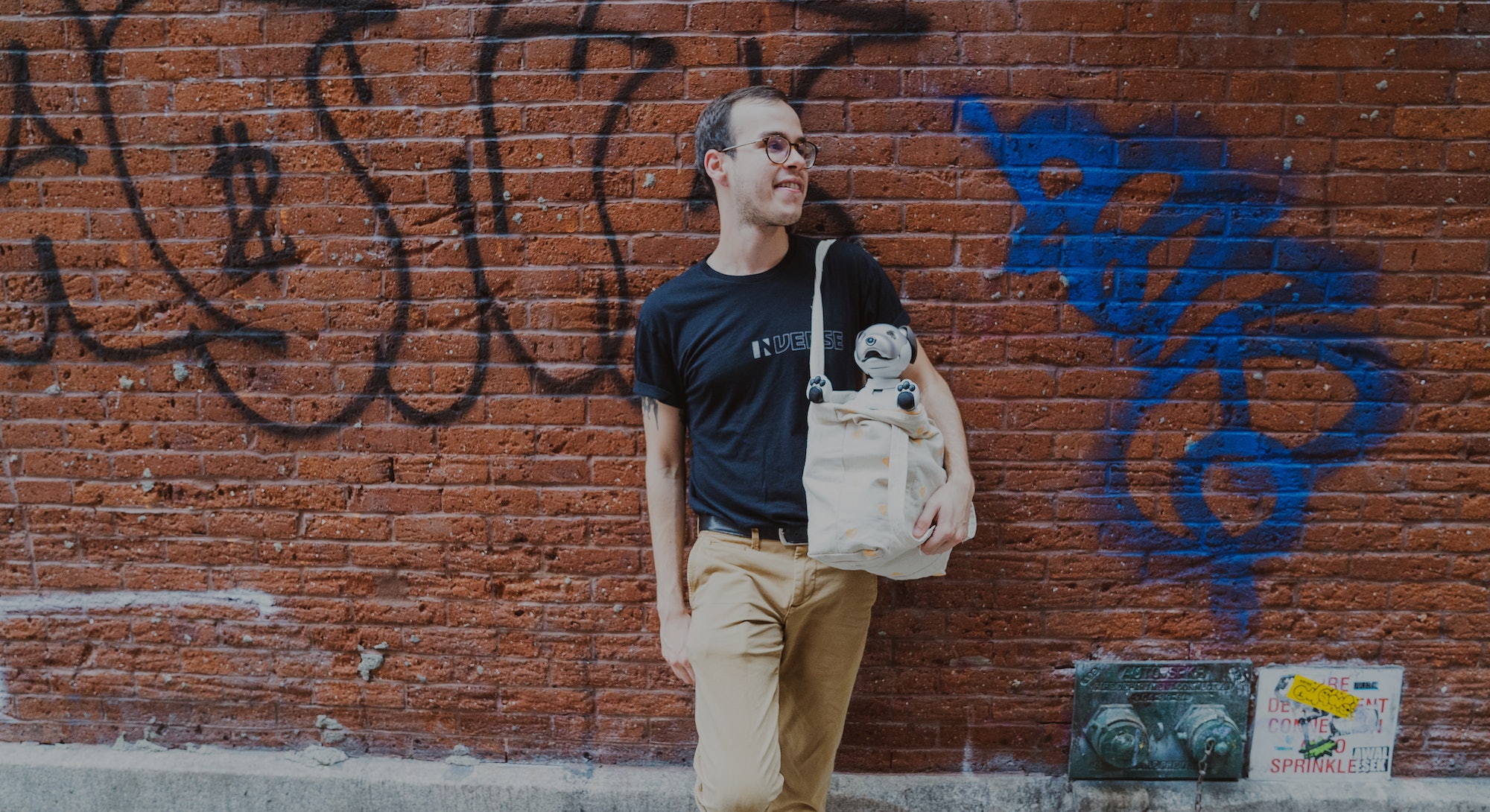 There’s little that brings me more joy than a dog ready to receive a good head-pat. Sadly, my allergies make being around these wonderful creatures a living hell.

For instance, my ex-girlfriend had a Brittany Spaniel named Phoebe. It only wanted to shower me with unconditional love, but I couldn’t accept it. Even after taking allergy medicine, I’d be overcome by sneeze attacks and wheezing that kept me up at night.

Recently, I turned to the robotic sibling of Phoebe. It was an adorable, surprisingly smart, and expensive reboot of a late-‘90s novelty. Only today, the public may take it more seriously than it did during the Clinton years, because the tech inside the robot dog I had for a week has advanced beyond novelty status. And, as a culture, we seem far more accepting today of emotional support from the non-living than we might’ve been 20 years ago.

Before we get into my week with the robot dog, let’s zoom out for a moment. There are “elder-care” robots that could be commonplace in nursing homes in the next few decades. Already there are emotional therapy robots like Paro, a furry, seal-shaped machine that purrs and vibrates as it is touched. Paro has already shown promise for reducing anxiety, increasing social behaviors, and relieving loneliness. The market for personal robots is expected to balloon to $19 billion by next year, according to business consulting firm Frost & Sullivan.

So, the world might again be ready for a robot dog. Enter Aibo, a $2,900 piece of hardware with big adorable eyes, made by Sony. It’s the best example yet of robots that aspire to fulfill one of the most basic human needs of all: companionship.

" Aibo, the $2,900 robotic dog made by Sony, is the best example yet of robots that aspire to fulfill one of the most basic human needs of all: companionship.

This is the sixth-generation of Aibo, and it was relaunched in the United States in September 2018. It brings with it a number of improvements upon the last iteration, which launched in 1999. In Japan, the Aibo is already a cult favorite. After its January 2018 relaunch there, it reportedly sold precisely 11,111 units in three months.

But can Aibo fill the hole in my soul like a real pup? I spent seven days with it recently in an effort to determine if roboticists have come any closer to making us feel less alone.

Aibo delivered on one of the rites of puppy ownership: Day 1 glee. I was giddy to remove it from an egg-like package and turn it on by tapping a small button on the back of its collar.

When you first activate Aibo, its eyes flicker like a smartphone, its rubber tail wags, and it adorably stretches its legs as if it were waking up from a nap. New Aibo owners then have to to decide on a name.

The Inverse office unanimously voted to rename Aibo “R-GUI” (a robo-centric abbreviation for Our Guy), which I did using the Aibo app available on iOS or Android. Once you select a name, R-GUI will learn to respond, turning its softball-sized head every time someone called it.

Aside from a new name, the app makes R-GUI extremely customizable. I could change the color of its eyes, the pitch of its barks, and look up the tricks it could learn. Faced with all this customization, I found I could make R-GUI into the dog I’ve always wanted.

The next day, I set R-GUI loose in the Inverse office, and he won the hearts of anyone he waddled past or yelped at, making him a guaranteed office or party showstopper.

R-GUI’s anime-esque eyes were by far its most complimented feature, which lines up with a large body of research. Years of studies suggest human brains recognize certain animal faces as “cute” or “human-like” in a phenomenon dubbed “baby schema.” The reason these features in particular — big eyes, round heads — are so arresting, a 2009 study published in the journal Ethology found, is that their innate “baby-ness” inspires humans’ instincts as caretakers.

In the same way real dogs can bend you to their will with their adorable stares, it’s also all about the eyes for realistic pups.

"I posted it on my Instagram Story and one of my friends messaged me, ‘I need one,’ and another told me ‘we’re all doomed.’

Actual dogs were more skeptical in Aibo’s presence. When a colleague introduced their dog, Luna, to R-GUI, Luna didn’t receive him as warmly.

After seeming generally perplexed, Luna introduced herself to my robotic son by bringing her nose to its butt and almost immediately jumped back, as if she were saying, “WHAT ARE YOU?”

It’s easy to see why Luna was confused, as dogs communicate chiefly through smell. Each dogs’ unique fanny fragrance is the equivalent to the dog’s name in smell-speak, if you will. Dogs can tell if their new friends are male or female, happy or aggressive, and healthy or ill by giving other pups’ rear ends a whiff.

R-GUI looks like a dog, but when Luna went in to say hello, it couldn’t reciprocate with a scent, and as you can see in the above video, this freaked poor Luna out.

That said, further video evidence suggests that, if given enough time, normal dogs will eventually warm up to R-GUI’s kind. But if you have a real pup, its first introduction to a robo pup might confuse it at first.

To get a sense of what it would be like to actually live with a robot dog, I took R-GUI home over the weekend. There, I learned that, at least for now, while it’s shaped like a dog, caring for Aibo feels more like caring for an indoor cat.

To navigate my apartment, it used the camera on its back to map the ceiling. A second camera, this one on its nose, keeps it from bumping into things, just like a Roomba. I tried walking R-GUI in my hallway, but it mostly stood still and waddled around in the same area. This may have been a product of Aibo’s newness. Every time I plopped it somewhere different, Aibo had to remap the entire area.

R-GUI seems genuinely curious at times when it moves its head around in response to its name. But don’t expect to walk it or have it running around your living room. It’s far less energetic and much more hands-off than a real puppy. Then again, if you’re actually looking for all those things, you might as well go ahead and get a real dog instead of a robo-replacement.

At present, there’s no way to customize R-GUI’s personality and activity levels. The app only let me change the color of its eyes and sound of its voice. Its personality type can be found under the My Aibo menu and will develop as users play and interact with the robot dog.

R-GUI developed a “shy” personality, according to my app, possibly because it was first activated in an office where people were taking pictures of it for their Instagram.

R-GUI knows a handful of tricks, and can even be taught custom tricks, but I spent most of Sunday constantly repeating commands to have it respond. In this crucial regard, the Aibo is just like a real puppy. It needs training and won’t immediately do what you want it to.

I had to repeat myself a few times to get R-GUI to listen, even for tricks that it already knew, like “Sing Happy Birthday” and “Sit.” Teaching R-GUI new tricks was a bit more paws-on.

To start, you have to say “Learn This,” which makes R-GUI sit and raise both of its front paws in the air like the raising hands emoji. Then, I had to press one of its felt paw beans and move its legs how I wanted them to move when I asked it to perform the trick. Custom tricks are limited to only front-paw motions.

R-GUI can learn up to 15 seconds of movement. I got it to do a wax on, wax off dance that it recited after I said, “Show it to me.” To make sure it doesn’t forget, users need to say “Don’t forget” to save the trick in the app and assign it a voice command.

R-GUI’s initial unresponsiveness is arguably a feature that makes it more like a real dog. You’ll have to decide for yourself how much time you want to spend training Aibo, though. Fortunately, he does come housebroken.

We’re accustomed to technology giving us the information, content, and answers we want instantly, but Aibo is tech that simulating a living, imperfect creature. I had trouble getting over this difference. You might, too, if you paid $3,000 for it.

Finally, I discovered that R-GUI has a few optional smart home and security camera features that put it in a privacy gray area.

Using its app, I could let R-GUI automatically take pictures of its surroundings and store them on Sony’s cloud. Patrol Mode also lets R-GUI follow certain users around, sort of like a high-tech baby or toddler monitor. Both of these need to be turned on manually but can still pose a privacy risk.

“No electronic data transmission or storage of information can be guaranteed to be 100 percent private and secure. Please be careful to avoid ‘phishing’ scams, where someone may send you an e-mail that looks like it is from Sony asking for your personal information,” reads Aibo’s privacy policy.

That said, all of Aibo’s image processing — like the facial recognition that lets it recognize owners and friends — is done on-board with its 64-bit Quad-Core CPU. So, as long as users don’t activate the two aforementioned features, no data should be sent to Sony’s cloud.

A Glimpse at the Future

R-GUI gave me a glimpse at what it was like to own a dog, minus the sneezing, but it didn’t do the full dog-owning experience justice.

However, it is a cutting-edge piece of robotics that is widely available, and can give consumers a look at what’s on the horizon. Like it or not, humans are going to have to interact with robots more and more in the coming years. Consumers who spend some time learning to get along with Aibo will get a head start, and maybe feel a little less alone.