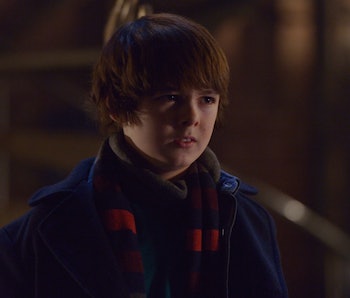 The Strain is one of those shows that wears its themes on its sleeve and has a history of taking off its shirt. “Intruders,” which is all about borders, invaders, and metaphorical walls, is a prime example of this tendency to be overt. And, no, there’s no resolution here. Another week has gone by and we still don’t have a great notion of anyone’s — or anything’s — endgame.

In what may be The Strain’s biggest misstep to date, the show is extending Zack’s longing for his mother for yet another episode. He has tested the patience of everyone, viewers included, and this week he continues to mope around. The attack in the church (when Fitzwilliam died, RIP) has unfathomably driven home the point: Mom is dead, little buddy. Or a mutant vampire. Either way, family dinners are never going to be the same.

Eph confides in Martinez that he and Zack are falling into the “same circles” and it’s the truest thing he’s ever said on the show. It’s also a distillation of an utterly tiresome storyline that we know can only end in several ways: Kelly’s ultimate death will relieve Zack or break him completely; some absurd cure will reverse Kelly’s condition (God I hope not); she will become some right-hand servant that upstages Eichorst.

In the end, next week is do or die for The Strain. There are only five episodes left and the current storyline has been stretched past its breaking point. It’s time for people to start fighting each other.

Next week’s episode is titled The Battle for Red Hook, which is a positive sign. I admit I have a weird thing for people joining our primary gang, but with Quinlan recruiting Gus back into working for the Ancients will we see Gus and his company (Could Angel still fight in some way?) joining the Scoobies?

Talk about barriers being broken: After two whole seasons these disparate stories could, in theory, finally come together.