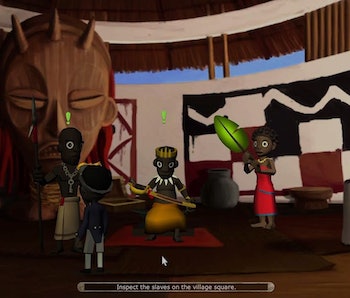 Who among us doesn’t love a good Steam sale, amirite?

Well, it turns out this weekend Steam had a particularly interesting item up for sale: For the very reasonable price of $3.49 you could get your hands on Playing History 2: Slave Trade from Denmark’s Serious Games Interactive.

Originally released in 2013, the game is billed as an educational tool designed to “put the student in the middle of important and interesting points in history.” The series, with other entries that focus on the plague and Vikings, has won awards for its ability to “approach an important topic in an engaging, fun and humoristic way.”

Here’s the summary for Slave Trade. Get ready to chuckle:

Travel back in time and witness the horrors of slave trade firsthand. You will be working as young slave steward on a ship crossing the Atlantic. You are to serve the captain and be his eyes and ears. What do you do, when you realize that your own sister has been captured by the slave traders?

Understanding the horrors of the slave trade through a “fun and humoristic” first-person point-and-click adventure where your 8-to-14-year-olds can play as a child slave assisting the captain of a slave ship while attempting to free his sister and himself from bondage?

What could possibly go wrong?

Trading tools for slaves with a generic African chieftain who inexplicably talks like Mr. T? Hilarious!

And oh, wait! What do I spy with my little eye in the preview? Is that … Slave Tetris?

Yeah, I’m pretty sure that’s a cartoon mouse in a silly hat challenging the player to a round of Slave Tetris …

After the very predictable backlash on social media over the weekend, Serious Games CEO Simon Egenfeldt took to Twitter to defend the game as a “serious” attempt at illustrating the inhumanity of the slave trade.

(PROTIP: The “You’re only mad because you just don’t get it!” Twitter response is the social media equivalent to throwing napalm on a grease fire, but I suppose we all have to learn that at our own speed. Twitter! It’s educational!)

I’ve heard plenty of the “Well, you have to understand, in some European cultures, they just have different ideas about what does or does not constitute racism” nonsense. Even if I thought the European equivalent of the “heritage not hate” argument held any more water than its lame American cousin, there is no way to interpret stacking grossly stereotypical cartoon versions of broken slave bodies on a slave ship as anything but disrespectful.

I definitely fall into the “learn history so it never repeats itself” school of thought, and I’ve been a big fan of the computer-game-as-educational-tool from the minute I first played Oregon Trail on the old green-screen Apple in the school library. Quite frankly I don’t think an educational game about the slave trade is inherently a bad thing if done well, nor do I think that Serious Games’ intention was to insult or offend.

But that’s kind of the problem isn’t it? Slapping a few cutesy cartoon rodents wearing silly hats on top of a game that involves simulating the actual slave trade as an actual child slave helping an actual slave trader, in between rollicking rounds of Slave Tetris, is not, nor will it ever be an acceptable way of “teaching” anyone anything, anywhere on this planet or beyond.

Inherent in the attempt to “educate” people about something as horrific as the trans-Atlantic slave trade is a responsibility to pay it the due deference and respect it deserves, especially if you happen to hail from a country that profited from slavery and continued to colonize the descendants of slaves well into the 20th century. To then create a child’s game chock full of the same stereotypes and racist tropes still perpetuated in your country, call it a teaching tool, then accuse the people who object of being “sheep,” is even in its most generous reading horribly insensitive and disingenuous.

We all (well, I certainly hope “we all” applies here) acknowledge that trans-Atlantic slavery was barbaric, that it was and is a dark stain on the human record. But in making a plaything of it, even with the best of intentions, what is really being taught?