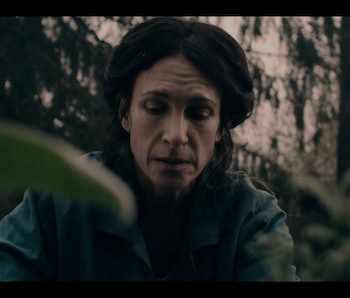 Eleanor Lawrence may have been introduced early on in Season 3 of The Handmaid’s Tale, but the show hasn’t fully explored her background. That is, until Episode 7, “Under His Eye,” revealed some pertinent information about her history.

So what’s the deal with Mrs. Lawrence? The more she revealed during Season 3, Episode 7, the further her loyalties were called into question. How does she feel about Gilead? What haunts her from her past? “Under His Eye” was finally able to answer some of these questions, but it may not have been the ones we expected.

Eleanor has been a recluse almost the entire time we’ve known her, interacting primarily with her husband (and the Marthas when need be). June has limited conversations with her until she decides to use Eleanor’s hermit-like status to her advantage. So what does Episode 7 reveal about the wife of one of the most powerful men in Gilead? Well, there’s the fact that she’s bipolar, which explains a lot of her behavior in previous episodes, such as her abrupt change in mood and depression.

It was unclear if her disorder was, in part, brought on by the circumstances of her situation. After all, she seemed to know what Commander Lawrence had done with regards to his ideas for Gilead, but she’s never seen venturing into the outside world to witness it firsthand. That changes as soon as June gets her out of the house in an attempt to see her daughter Hannah. While Eleanor is exhilarated to be out and about for a while, her fear is potent, especially when she and June bump into Mrs. Putnam.

That meeting triggers Eleanor’s second revelation to June: she and Lawrence had attempted to conceive a child prior to Gilead, but the commander didn’t agree they should given her medical situation. So it’s confirmed that Eleanor was bipolar before coup, though perhaps the knowledge of what her husband had done proved to be too much for her and she sank deeper into depression because of it. It could also be that their disagreement over having children caused some tension in her marriage and aggravated her condition. Whatever the reason, “Under His Eye” provided a brief glimpse into her head space.

However, it’s the last reveal that proves Eleanor may not be as innocent as previously believed. Though she’s helped June and the Marthas before, (like when she hid an injured Martha knowing they’d been doing Mayday business), Eleanor admitted that Gilead’s creation may not have been so bad after all if it meant more children. It definitely makes her less of an ally moving forward. After all, recluse or not, Mrs. Lawrence still benefits from the system and the power she holds as a Wife. While this particular conversation provides some insight into why she may not have challenged the system, it also doesn’t make any sense considering how little she interacts with it.

If Commander Lawrence disagreed about Eleanor carrying a child because of her bipolar disorder, then why not handle it the way other households have? It’s not like they haven’t had their share of Handmaids. Still, despite her words, she’s currently the only Wife who at least sounds unsure about Gilead’s status and it’s apparent when she calls June by her real name instead of the designated Ofjoseph. So while Episode 7 explained some of Eleanor’s backstory, how much of a role she’ll play in the remainder of Season 3 is unclear.