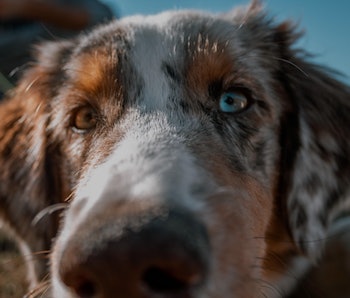 Some dogs have two different colored eyes. Do other animals (besides people), and if so, why? – George, age 10, Hethersett, UK.

Some dogs are born with one brown eye and one blue eye, which can look very strange since we’re used to seeing dogs with two brown eyes. This is sometimes called “wall eye,” and it’s caused by certain genes that are passed down from parents to offspring.

If you look closely, you’ll also see that dogs with two different colored eyes have unusually colored coats, too. Their coats might be dappled or streaked with white. This is because the genes for eye color and coat color are closely connected.

By now, you might be wondering — what are genes? Let me explain. Every living thing is made up of cells. Each cell contains all the information needed to tell the body what to look like and how to work. Every little bit of information is called a “gene,” and there are lots and lots of genes which decide nearly every aspect of how we are.

Passed Down From Parents

For example, there are around 25,000 genes in human cells, which can decide everything from our height, to our hair color, or how likely we are to get certain diseases. The genes are made up of DNA and held together on stringy structures called “chromosomes” in the center of the cell.

Because every mammal comes from two parents, it has two copies of every gene — one from the mother and one from the father. Each copy may be telling the body to do something different. For example, the mother’s gene might be saying “dark hair,” while the father’s says “fair hair.”

In that case, the mother’s gene will win, and their baby will have dark hair, because the dark hair gene is dominant over the fair hair gene. The baby will only have fair hair if both parents pass on the gene for fair hair.

The genes for wall eye and streaky coat are similar to the fair-haired gene, in this way. An animal will only have those features if that specific gene is passed down from both parents. When the mother and father carry the gene, but don’t have wall eye themselves, then some of their offspring will have it, though not all of them.

See also: A Squished Face Isn’t the Only Reason It’s Hard for Bulldogs to Breathe

Wall eye is also sometimes seen in rabbits, cats, cattle, sheep, and horses. Horses that have one blue eye usually have black and white patches on their coat — they are called “piebald” or “pinto” or “paint.” Some of these horses even have two blue eyes (one of mine does!), which makes them look even more unusual.

Humans can also have one blue eye and another of a different color, like brown or green. This often goes with a white streak in the front of their hair.

Sometimes, having wall eye can cause problems. For dogs, the eye that is blue often has problems that can affect its sight. For this reason, breeders don’t let two dogs with wall eye and streaky coats have puppies together. If they do, then the puppies will often be blind and sometimes deaf as well.

In horses, wall eye does not seem to cause problems with vision, though having two blue eyes can be associated with deafness. Some cats and humans who have it can also have trouble hearing, and humans whose parents both have wall eye may be unable to speak or hear.

This article was originally published on The Conversation by Jan Hoole. Read the original article here.