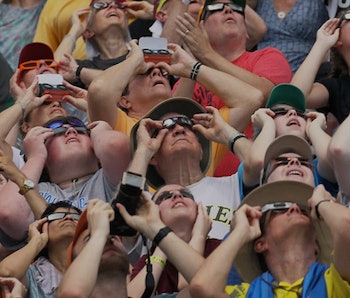 In just a few days’ time, another total solar eclipse – the most stunning of all celestial events – will be upon us. And if you happen to be in Argentina or Chile next week, you’re in for a real treat.

But fear not, even if you haven’t got travel plans that include a visit to a southern hemisphere paradise, you can still watch the interstellar spectacle as those kind folk at NASA are live streaming it, the agency announced this week.

During a total solar eclipse, the moon perfectly fits over the sun for just a few breathtaking seconds, and all that’s visible is a heavenly glow behind the back disc of the moon, and the ghostly wisps of the solar corona.

Throughout history, eclipses have been interpreted as omens or portents. The ancient Greek historian Herodotus wrote that Thales of Miletus predicted an eclipse that occurred during a battle between the Medes and the Lydians. Both sides put down their weapons and declared peace as a result of the eclipse.

Another example is an eclipse recorded by Herodotus before Xerxes departed for his expedition against Greece, which is traditionally dated to 480 B.C.; it was matched by astronomer John Russell Hind to an annular eclipse of the Sun at Sardis on February 17, 478 B.C.

Partial phases for the eclipse begin at 12:55 p.m. Eastern, and totality begins when the umbra of the moon touches down 621 milesnortheast of New Zealand at 2:01 p.m. Eastern. time

The shadow then races across the Pacific, threading its way between the Pitcairn Islands, before finally making landfall 300 kilometers north of Santiago, the capital of Chile, at about 4:38 p.m. Eastern. The dramatic climax for the eclipse then concludes as the shadow sweeps across the Andes Mountains into Argentina and south of Cordoba and the city of Buenos Aires.

The predicted period of total blackout for this event is 4 minutes, 33 seconds as the shadow crosses over the mid-Pacific. There’s a wealth of additional information on the excellent Time&Date site. After this, the next total solar eclipse over South America will be December 14, 2020.

Stream the total solar eclipse in South America live on the NASA website.