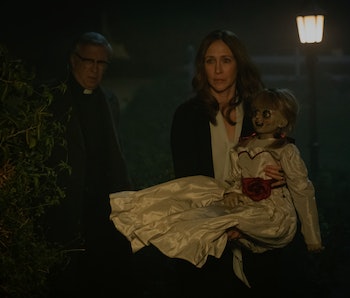 First-time horror director Gary Dauberman didn’t want to end Annabelle Comes Home in a way you’d expect. In a change from most franchise horror films, let alone the Conjuring Universe, Dauberman actually wanted things to end on a happy note. Here’s what that means for the future of the horror franchise.

At the end of Annabelle Comes Home, an evening of nightmares cease when the kids — Mary Ellen (Madison Iseman), Daniela (Katie Sarife), and Judy Warren (Mckenna Grace) — return Annabelle to her glass display blessed by a priest. As anyone with a passing knowledge of demonology knows, evil spirits are weak to holy objects, making the Warrens’ glass case an ideal prison for Annabelle. (That’s assuming no one opens it, and this being a horror movie, of course someone does.)

The end of the film takes place on Judy’s birthday party, which Judy’s classmates didn’t attend because of the Warrens’ unfavorable reputation in their neighborhood. But Mary Ellen, Daniela, and Mary Ellen’s boyfriend Bob (Michael Cimino) drop by because fighting demons together can create quite the strong bond.

That’s also when all of Judy’s classmates show up too, giving her the party she really wanted. The final shot features Ed Warren (Patrick Wilson) playing his guitar for the kids.

“I didn’t want to end it on an ominous note,” Dauberman tells Inverse. “These aren’t ominous people. These are good people. They always find the hope. I wanted to do that with this ending, as opposed to leaving it on a dot, dot, dot. Not to say we weren’t tempted, but I just wanted to end it a little unexpected.”

Away from the party, there’s another sweet moment: Lorraine Warren (Vera Farmiga) escorts Daniela to their basement of haunted objects. In the daylight, it’s actually not so bad down there.

While Daniela released Annabelle in the hopes of reconnecting with her late father, the film still doesn’t make her out to be a bad person. And so Daniela gets her wish, to hear from her father one more time, with the help of Lorraine. She tells Daniela she communicated with her father, who wants Daniela to know the accident that killed him wasn’t her fault. The two hug, sharing a sweet moment in the scariest basement in America.

But did Lorraine really communicate with Daniela’s father, or was Lorraine just comforting a child in need? To Dauberman, their moment was real.

“That’s a true, genuine moment,” Dauberman says. “Daniela was walking around with the weight of her world on her shoulders. It’s real relief. That’s what Ed and Lorraine brought to a lot of people. I wanted to exemplify that in that scene.”

Annabelle Comes Home is in theaters on Friday.