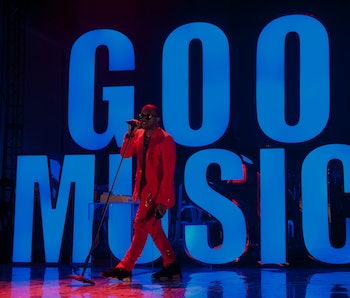 On Tuesday, G.O.O.D. Music’s Teyana Taylor released The Cassette Tape 1994. The five-song mixtape is polished and pleasant. Kanye West co-produced the opening “Your Wish Is My Command,” which is the only standout on an otherwise forgettable tape.

Fellow G.O.O.D. artist Kacy Hill also unexpectedly released new music on Tuesday, premiering “Foreign Fields.” Hill’s been with G.O.O.D. since 2014, but has just two songs to her name (“Experience” being the other). Her gentle voice complements the quiet track, which is almost too clean for its own good. There is very little to latch on to. She asks a question that we could apply to the entire G.O.O.D. Music output: “Why do we care?”

Kanye West started the label in 2004 and has actually found success with several albums reaching gold or platinum status. The biggest hits, though, have come courtesy of pre-established artists like John Legend, Common, and Pusha T. Outside of Big Sean and the recently-defected Kid Cudi, West has struggled to “discover” legitimate lasting talent. (Some would argue against Sean and Cudi’s respective artistic merit, but their commercial appeal is undeniable.)

Cyhi the Prynce may be the most famous example of a West protege who just never panned out. (Consequence, Cyhi’s predecessor as West’s Next, did release a real album in 2007.) West pushed Cyhi hard, including him on G.O.O.D. Fridays singles and My Beautiful Dark Twisted Fantasy’s “So Appalled” alongside legends Jay-Z, RZA, and Pusha T. But Cyhi has yet to release an album, and the likelihood of him ever doing so grows slimmer every day. Cyhi’s career purgatory isn’t an indictment on West as a labelhead; If anything, he’s realized Cyhi’s not quite ready for an album, instead choosing to executive produce projects like 2014’s Black Hystori Project, Cyhi’s most definitve work.

When looking beyond hip-hop, West can’t seem to figure out what makes a great pop artist. He often gravitates toward singers with pretty but too thin voices, who can’t quite make a track their own. On top of that, the songwriting is typically too vague to resonate with the listener. Los Angeles’s Ryan McDermott, for example, has yet to release a song commercially, likely because his ability has yet to exceed fine-but-empty tracks like “Paradise.”

Chicago’s Holt, the most recent signee, is more of the same, announcing his G.O.O.D. arrival with a cover of Kavinsky’s “Nightcall” from the Drive soundtrack. Holt creates a vibe that tries to emulate darkness without ever indulging in it, leading to middling results. Still, it sounds decent enough in the background.

West has a great ear for talent, which makes his G.O.O.D. Music roster failures curious. His Very G.O.O.D. Beats production team includes the revered Evian Christ, Hudson Mohawke, and Travi$ Scott, too, which only increases the mystery. It’s likely that West keeps his label roster so scant to protect his own music. A beat that could turn into a potential Teyana Taylor or Holt hit, for instance, is one less hit for Kanye West. In addition, West mines other’s talents for his own output, as on Yeezus, which functions as a pastiche of underground electronic music as much as a rap album. His knack for consistently great output at other’s expense is not a knock on West. He should continue to blaze trails on his own and think about cutting ties while he still can.

More like this
Gaming
Sep. 22, 2022
You need to play the funniest music game ever made ASAP
By Joseph Yaden
Gaming
Sep. 26, 2022
How to unlock the wild Trombone Champ secret ending
By Joseph Yaden
Entertainment
20 hours ago
House of the Dragon Episode 7 ending explained
By Jake Kleinman
Share: