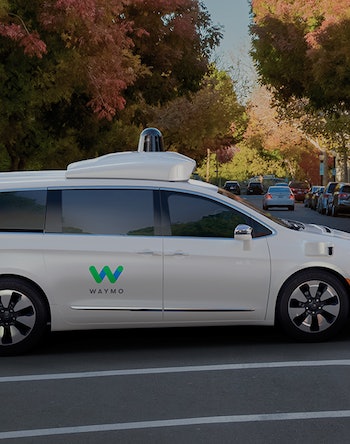 Dmitri Dolgov is fighting the elements in his bid to bring autonomous cars to the world. The chief technology officer of Waymo, the Alphabet-owned firm born out of Google’s semi-secret X development lab, is at a point where his vehicles can handle day-to-day operations. But before the firm can think about taking the human out of the driver’s seat, they need to weed out as many edge cases as possible.

“Phoenix gets these crazy dust storms every once in a while, and different sensors, cameras, lidars, radars, can sense the environment in those conditions differently,” Dolgov tells Inverse about the testing of its public taxi service in Arizona.

So, yeah. Dust storms. It’s all part of “chasing nines,” as it’s known in the community, for autonomous car developers. Tests like the ones happening now will help avoid something fatal in the future, and encourage the population to get into an autonomous vehicle with confidence. They have a tough nut to crack when it comes to credibility because of well-publicized fatal wrecks in recent years. Dolgov is one of the few minds that could make it happen.

Dolgov has been working with the Waymo team for over a decade, previously working with the Toyota Research Institute on its own autonomy project. Waymo grew out of a series of DARPA challenges in 2007 that tried to make cars move autonomously, a Carnegie Mellon University-hosted event with an attendee list that now reads like a who’s-who of autonomous cars. Larry Page, now Alphabet’s CEO, supported the team’s early research in the face of a car industry that assumed autonomous driving was a pipe dream that had another 30 years to go.

The reward could be a new mode of transport that could shift people’s perception of time and space, a paradigm-shifting product that resembles the iPhone in its influence. It could give owners a pay rise by opening up more avenues to education, or host new classes of businesses-on-wheels, or enable people that otherwise can’t drive to explore their environment, or even improve safety by taking the human element out of the equation. It’s an idea that could transform the more than one billion cars on the world’s roads.

If Dolgov and his team can’t chase enough nines, it could tarnish the tech before it even gets started. Waymo has never been involved in any fatal public accidents, but Uber suspended its whole project after one of its vehicles killed a 43-year-old in March 2018, and Tesla’s semi-autonomous Autopilot mode has also been linked with a fatal crash by the National Highway Traffic Safety Administration.

While thousands die on the roads every year, and autonomous cars almost certainly will prevent untold numbers of fatal wrecks, for them to be adopted at all they have convince users to place their trust in a faceless, inaccessible third party as they careen down a road at 70 miles per hour.

Waymo Self-Driving Car: How to Make a Car of the Future

While the Google-adjacent company may bristle at the comparison, the heart of Waymo’s technology feels a lot like an iPhone-styled system. Waymo offers a fully-integrated suite of sensors that work together to deliver a smooth experience. When Steve Jobs launched the iPhone in 2007, it combined a multi-touch screen with an accelerometer and ambient light sensor to create a phone that felt smarter than anything that came before. Similarly, Waymo’s system combines lidar, radar and cameras to create something even more spectacular.

Not everyone is completely on board with Waymo’s vision of how an autonomous car should look. Tesla CEO Elon Musk has notably eschewed lidar (recently calling it a “a fool’s errand”) for its autonomous driving system, claiming that its setup of cameras, radar and ultrasonic sensors is not enough to provide full autonomous driving capabilities.

Tesla vehicles rely on cameras, sensors, radar and this powerful computer. Musk’s vision got a supporter in May, when MIT autonomous driving researcher Lex Fridman described a computer vision-focused approach to be the “longer-term solution,” describing the camera as the “richer, deeper sensor” versus lidar.

When asked what Dolgov made of this, he responded this way: The multitude of sensors at play in informing a vehicle with Waymo’s technology will play a role. It’s not an either-or scenario, for Dolgov.

“I think it will all play a key role,” he says. “To me, it’s not about one versus the other. I think it’s about all of them complementing each other to give us the most capable, safest drivers that we can build.”

In other words, why drop the lidar when you can use it alongside a camera?

When Will Waymo Expand?

One of the key areas where self-driving cars may improve in the coming years is in the artificial intelligence at work behind the scenes.

“The trend that we’re seeing of advances in deep learning, and the truly magical ability of these systems to leverage rich raw data, I think that will continue and give us more and more performance,” Dolgov tells me.

Waymo, which is already running its Phoenix taxi service, has plans to expand internationally. Dolgov couldn’t puta date on when the company may expand.

“We will expand a little bit in the U.S. first, and then I hope we can bring it to more people across the globe,” Dolgov says.

When it does, it could spark an iPhone-like resonance across the globe.