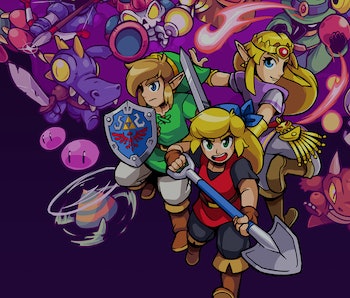 The new Legend of Zelda spinoff Cadence of Hyrule offers a feature most official Zelda games don’t: The option to play as Link or Zelda. But who should you choose and how will it affect your gameplay experience? Here’s what you need to know before picking between Link or Zelda in Cadence of Hyrule.

After a short tutorial introducing Cadence of Hyrule’s unique rhythm-based dynamic, the game starts by presenting you with the choice, but there’s no real guidance or explanation for what it means. Thankfully, we’re here to help.

Cadence of Hyrule Zelda or Link? How to Decide

The truth is, when it comes to gameplay, these two characters are very similar. Link has a shield and his classic spin attack, while Zelda has a magic fireball attack and a special block. Otherwise, they can use the same weapons and items you’ll find in the game.

The other big difference boils down to where you start on the map. Pick Link in Cadence of Hyrule and you’ll begin in the grasslands area where you have to wake the iconic hero up from a nap in his house before you can start playing. Meanwhile, Zelda’s adventure begins in Hyrule Castle where the antagonist Octavo is introduced right away.

Of course, you’ll eventually access the whole map either way. So you should really just choose whichever hero you like more. And if you regret your decision, you can always unlock the other character…

How to Unlock Zelda or Link in Cadence of Hyrule

According to Gamers Heroes, you can find the playable character you didn’t pick in Kakariko Village. The exact location changes, but it’s often in the Southeast or Northwest corner of Hyrule.

There, you’ll find them sleeping in a bed and an old man will reveal that you can only wake them with a Hibiscus Potion. You can find one in the secret dungeon in the Kakariko graveyard by pushing the biggest gravestone. Clear the dungeon and beat the boss to get a Hibiscus Potion.

Cadence of Hyrule is available now for Nintendo Switch.