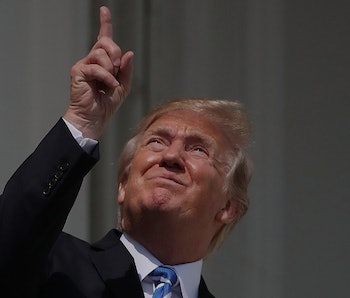 On Friday, President Donald Trump posted a peculiar tweet, possibly in response to a number of announcements made on the last day of the annual International Space Development Conference in Washington, D.C., or possibly in reaction to an interview with an Apollo 11 astronaut who criticized him. It’s difficult to say what motivated Trump’s ire, but the resulting tweet included three critical mistakes about NASA’s missions.

“For all of the money we are spending, NASA should NOT be talking about going to the Moon - We did that 50 years ago. They should be focused on the much bigger things we are doing, including Mars (of which the Moon is a part), Defense and Science!,” he tweeted.

There are at least three fundamental errors with that statement:

Vice President Mike Pence has said that the United States must return to the moon within five years “by any means necessary,” but officials have said that plan includes private industry as well as efforts from NASA in a public-private partnership. For the president to complain that one of the agency’s under his control shouldn’t even be “talking” about a mission for which his vice president has advocated so forcefully and so recently, creates confusion as to what the president is exactly thinking here.

Meanwhile, Apollo 11 astronaut Michael Collins knocked Trump on Thursday, on a CNN podcast, saying: “I don’t think he’s too much aware of Mars. Maybe he doesn’t understand that there IS a planet Mars.”

That might have the cause of Trump’s tweet; it might also have been as a result of something he had just seen on Fox News, as it has been documented the president tweets after watching things on TV.

Prominent voices for science were critical of Trump’s tweet, including astronomer and astrophysicist Phil Plait:

Can we expect Trump to be asked about his comments? Almost certainly. Do we think he’ll call it Fake News and instead insist that he was talking about the actual moons of Mars, Phobos and Deimos, and sending NASA probes there to study them..? The president’s record makes that seem unlikely.

Trump may also say that he actually meant using the moon as a staging point for a mission to Mars. Except that’s extremely confusing and also makes little sense, because he literally said “NASA should NOT be talking about going to the Moon.”

Critics of the president’s space policy ideas — which are full 180-degree turns — might find solace in one aspect of his tweet. He did call for NASA to focused more on science. As NASA’s budget for science missions has been cut by the president in the past two budget proposals, that seems unlikely, but a shred of hope in a confusing tweet with three errors might be the most positive take-away.