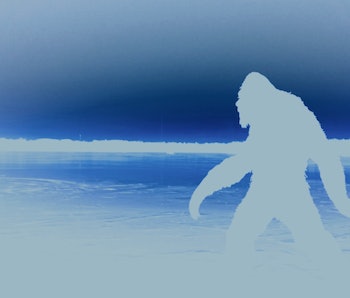 On August 26, 1976, Bigfoot hunter Peter Byrne reached out to the Federal Bureau of Investigation to ask about the fabled creature. It was not a prank. Byrne, who is now 93 years old, has been on a lifelong quest, spanning from Oregon to Nepal, for solid evidence of the legendary animal. As newly declassified FBI files reveal, Byrne asked the FBI’s forensic investigators to test a sample of hair that he suspected belonged to Bigfoot. Now, for the first time, the FBI has released the test’s results.

The whole series of events is laid out in the FBI’s declassified file on Bigfoot, which was released Wednesday in a tweet from the FBI Records Vault account that read, “Bigfoot:” followed by a link to the documents.

In Byrne’s first letter to the FBI, which he wrote on behalf of the Bigfoot Information Center, he acknowledged that his request sounded strange but assured the reader he was quite serious. He requested that the FBI let him know whether they’d ever done forensic examinations of suspected Bigfoot hair — and if so, he wanted to know the results.

“Will you kindly, to set the record straight, once and for all, inform us if the FBI has examined hair which might be that of a Bigfoot; when this took place, if it did take place; what the results of the analysis were,” he wrote. “Please understand that our research here is serious.”

Byrne also reassured the FBI that the bureau’s assistance did not imply it was involved in the project.

The FBI Responds to Bigfoot

In a letter dated September 10, 1976, the FBI’s Jay Cochran Jr. responded. At the time, Cochran was the assistant director of the FBI’s scientific and technical services division. He told Byrne that the FBI didn’t know anything about Bigfoot.

Cochran, who died in 2016, told Byrne that “we have been unable to locate any references to such examinations in our files.”

A couple of months later, Byrne upped the ante.

In a letter to Cochran dated November 24, 1976, Byrne requested that the FBI analyze a sample of skin with hairs attached.

At that point, Byrne had already been deeply involved with Bigfoot investigations for most of his life, having learned about the creature from bedtime stories his father told him about his travels to the Himalaya Mountains. He obtained this hair and skin sample after he was called to a site where two US Forest Service biologists in the Pacific Northwest had spotted an unidentified creature. Byrne recalled in an interview with The Washington Post that the trees in that area were extremely close together — too close for a hypothesized massive ape to squeeze through. In the bark of the trees that made up that tight squeeze, he collected the hair and skin sample, which he sent to the FBI.

“I am writing again to ask if you could possibly arrange for a comparative analysis of some hairs that we have here which we are unable to identify,” he wrote in the November letter to Cochran.

Despite the odd nature of Byrne’s request, not to mention the fact that the department’s primary purpose was to examine evidence for law enforcement officials in connection with criminal investigations, Cochran took the request seriously and put the lab on the case.

“Occasionally, on a case-by-case basis, in the interest of research and scientific inquiry, we make exceptions to this general policy,” Cochran wrote to Byrne in a letter on December 15, 1976. “With this understanding, we will examine the hairs and tissue mentioned in your letter.”

The Source of Bigfoot’s Hair

In a letter dated February 22, 1977, Cochran revealed the true source of the hairs in Byrne’s samples. He was writing to Howard Curtis, the executive vice president of the Academy of Applied Sciences, an organization that funded some of Byrne’s work and had also supported other explorers’ hunts for the Loch Ness Monster.

The AAS was designated to receive the FBI’s report because Byrne’s efforts had taken him to Nepal for an expedition. Unfortunately, this letter didn’t contain the information Curtis or Byrne might have hoped. The hairs had come from a deer. 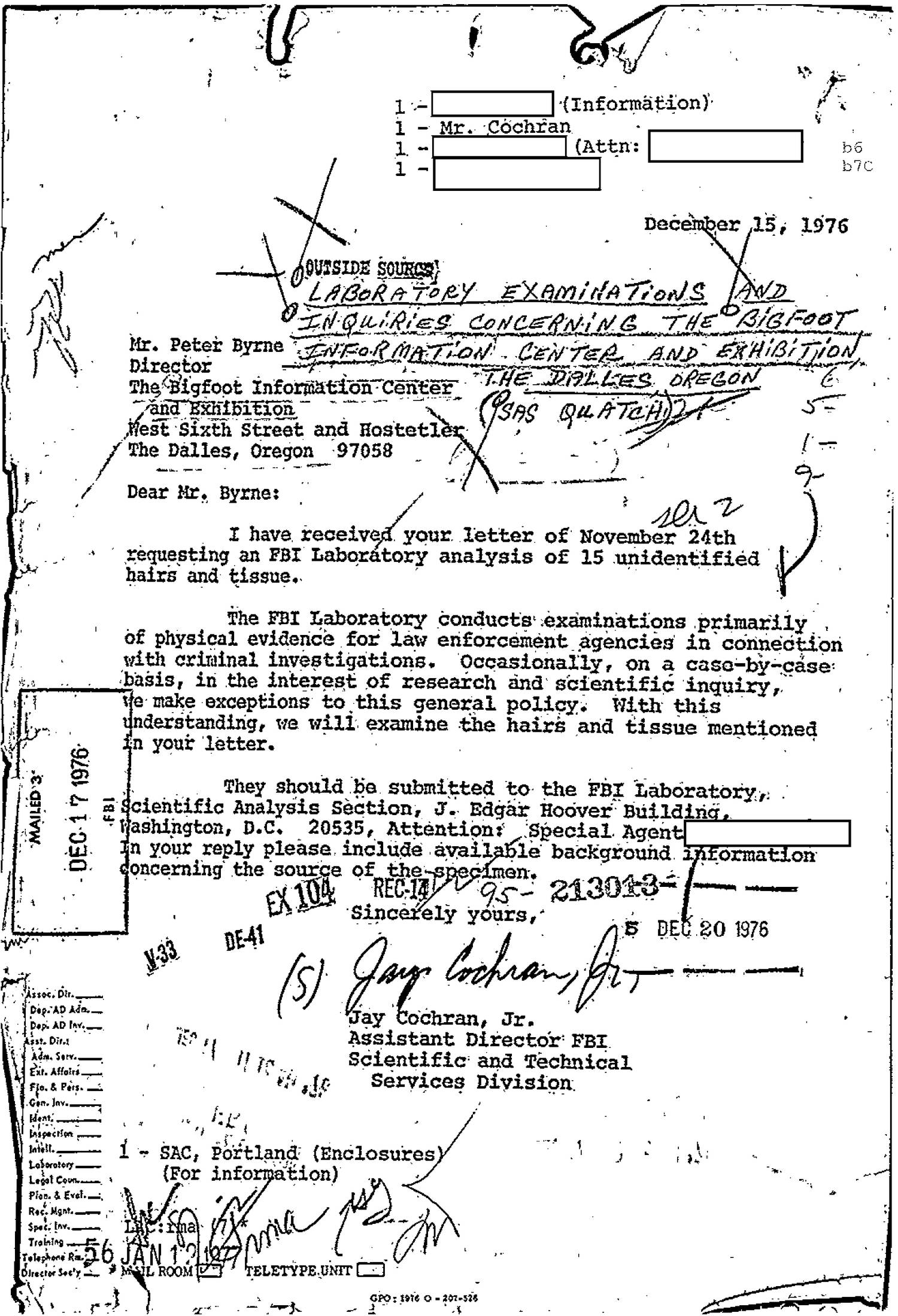 “The examination included a study of morphological characteristics such as root structure, medullary structure and cuticle thickness in addition to scale casts. Also, the hairs were compared directly with hairs of known origin under a comparison microscope,” wrote Cochran.

“It was concluded as a result of these explanations that the hairs are of deer family origin.”

This is where the story gets a little hairy. A copy of the letter is marked as sent in the newly released FBI file, and Curtis’s reply is included in the file, but Byrne claims not to remember the incident.

“We’re just finding this out,” he told The Post. “It’s disappointing.”

In reference to the correspondence with the FBI, Byrne told CNBC, “I don’t remember this.”

“It’s out of my memory,” he added, though he did recall contacting the FBI in the ‘70s about a possible sighting.

Regardless of whether Byrne remembers it or not, the letters are all available in the FBI’s records vault. And while this piece of evidence may not have panned out the way Byrne had hoped, it also doesn’t disprove the existence of a giant hominid that roams the forests of the Pacific Northwest.