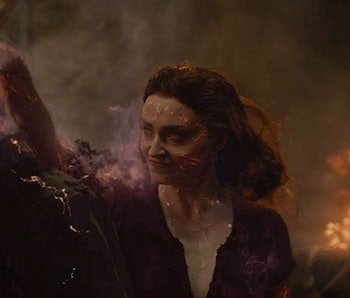 Most Marvel fans have already seen several iterations of the Dark Phoenix Saga between the ‘90s X-Men animated series and the original live-action film trilogy from the early aughts, but one different aspect of the new Dark Phoenix film has roots in the Marvel Comics storyline Avengers vs. X-Men. This Dark Phoenix Easter egg could lay the groundwork for Marvel Studios integrating the X-Men into the Marvel Cinematic Universe by adapting this storyline.

During a harrowing X-Men mission into space to save some American astronauts, Jean Grey is possessed by a cosmic entity known in the comics as the Phoenix Force. As a singular being of immense power, the Phoenix Force has the power to create life but more often winds up destroying it. Corrupted by the Phoenix Force’s power and exposed to trauma that Charles Xavier buried in her mind with psychic barriers, Jean Grey loses control and becomes the biggest threat the world has ever seen, even bigger than Apocalypse.

This is roughly how things played out in X-Men: The Animated Series and in X-Men: The Last Stand, but Dark Phoenix takes a surprising turn by introducing the D’Bari, a shapeshifting alien race that look like a mix between Groot and the Skrulls. Their leader Vuk assumes the form of a human woman played by Jessica Chastain.

Chastain’s role as Dark Phoenix’s real villain is where the Avengers vs. X-Men nod comes in. The Phoenix Force is split up into two separate pieces. Vuk offers to take the burden from Jean, and leading into the final confrontation, they’re both the Phoenix.

In the comics, there are fragments and echoes of the Phoenix Force spread around the universe, but the most significant example of it being split up into distinct, equal pieces happens in Avengers vs. X-Men #5.

Civil war breaks out between the Avengers and the X-Men in this comic arc when the Phoenix Force heads to Earth, looking to possess Hope Summers. The X-Men try to protect her, but the Avengers want to protect the Earth. While fighting on the moon, Iron Man blasts the Phoenix Force with a disruptor from a new, giant suit of armor, fracturing it into five pieces that possess Cyclops, Emma Frost, Colossus, Magik, and Namor. They become the Phoenix Five and rule the world for a time but are eventually defeated by the combined might of the reunited Avengers and X-Men.

Might we see an adaptation of this storyline unfold a decade from now on the big screen as Marvel devises a way to incorporate mutants into the MCU after the Disney-Fox merger? Avengers vs. X-Men feels epic enough in title alone to entice hordes of moviegoers into theaters, and with Dark Phoenix establishing this aspect of the Phoenix Force as a possibility, it’s beginning to feel just a little bit more possible.

Dark Phoenix is in theaters now.