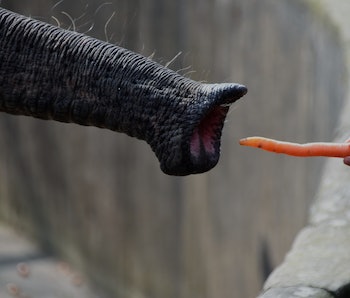 Asian elephants are extremely smart, but even the wise make mistakes. By looking for food in all the wrong places, they create conflicts with humans when they scrounge from crops or rummage through garbage cans. Fortunately, a discovery about their impressive, mathematically precise sense of smell, described Monday in Proceedings of the National Academy of Sciences, suggests a new way to shoo them away from human areas without hurting them.

In an effort to keep the hungry animals away without hurting them, people in Thailand have resorted to methods like electric fences or fire to scare away the errant elephants, but these can hurt the animals. The new paper suggests there’s a more effective way to nudge them elsewhere. In the study, a team of researchers show that the elephants have an almost mathematically precise sense of smell that allows them to quickly discern between two different food quantities without seeing them. This makes elephants the only animals known to differentiate quantities by smell and, importantly, suggests that directing them toward food might be a gentler option than scaring them off.

Corresponding author Joshua Plotnik, Ph.D., an assistant professor of psychology at Hunter College in New York City, tells Inverse that the project all started with a curious revelation.

“As part of a conservation education program my colleagues and I created for middle school students, we designed a study looking at whether elephants could follow human pointing cues to find food in buckets,” he says. “They couldn’t, which surprised not only me but also the elephant handlers (mahouts) in Thailand.” The mahouts, who had seen elephants retrieve tourists’ dropped sandals many times before, had always assumed the animals were responding to people pointing out the objects.

“This led me to a big turning point in my research focus,” says Plotnik. “What if the elephants weren’t following the pointing cue, but were instead using their ears and nose to guide their behavior (i.e., their ears helped them localize the directionality of the mahout’s voice while their noses led them to the smell of smelly feet).”

With this in mind, Plotnik and his colleagues designed an experiment to determine just how well elephants might use their sense of smell to analyze objects. They presented elephants with pairs of locked buckets of sunflower seeds, one of which had more than the other. After smelling the buckets to investigate them, the elephants would choose the one they thought had more seeds in it.

In this experiment, a strong trend emerged: The greater the difference between the amount of sunflower seeds in the two buckets, the more likely the elephants were to choose the right one. In other words, they could smell which one had more seeds, and this task became easier when there was a bigger difference.

Here’s a video of what one of those trials looks like:

For Plotnik, the main takeaway for this research is its implications for human/elephant conflict.

“Most strategies aimed at ‘preventing’ [human/elephant conflict] are based on fear — electric fences, firecrackers, etc. all aim to physically prevent elephants from gaining access to human habitation and farmers’ crops,” he says. “But why are elephants ‘raiding’ crops in the first place? By better understanding elephants’ needs in terms of habitat and resources, we can hopefully come up with better solutions to the conflict that take both human and elephant perspectives into account.”

He hopes that a better understanding of elephant psychology and decision making will help humans develop new ways of gently directing elephants to safer grazing spaces.

In fact, some researchers have already experimented with using smell to deter elephants from human-inhabited areas. In a 2018 paper published in Current Biology, researchers successfully kept African elephants away by using bee pheromones.

Plotnik says that finding peaceful ways to coexist with elephants is crucial for elephants — and people, who aren’t always as gentle as they could be. And with the dual forces of climate change and habitat destruction, coexistence will only become more difficult.

“All strategies I’ve seen, whether there is intention to hurt elephants or not (and in most situations, including in Thailand, the intention is NOT to hurt the elephants), are based on scaring elephants away from human habitat,” he says. “The conflict often intensifies as elephant natural habitat shrinks and the elephants either have no where else to go or they are attracted to high quality food resources that crop fields provide.”

Abstract: Animals often face situations that require making decisions based on quantity. Many species, including humans, rely on an ability to differentiate between more and less to make judgments about social relationships, territories, and food. Habitat-related choices require animals to decide between areas with greater and lesser quantities of food while also weighing relative risk of danger based on group size and predation risk. Such decisions can have a significant impact on survival for an animal and its social group. Many species have demonstrated a capacity for differentiating between two quantities of food and choosing the greater of the two, but they have done so based on information provided primarily in the visual domain. Using an object-choice task, we demonstrate that elephants are able to discriminate between two distinct quantities using their olfactory sense alone. We presented the elephants with choices between two containers of sunflower seeds. The relationship between the amount of seeds within the two containers was represented by 11 different ratios. Overall, the elephants chose the larger quantity of food by smelling for it. The elephants’ performance was better when the relative difference between the quantities increased and worse when the ratio between the quantities of food increased, but was not affected by the overall quantity of food presented. These results are consistent with the performance of animals tested in the visual domain. This work has implications for the design of future, cross- phylogenetic cognitive comparisons that ought to account for differences in how animals sense their world.