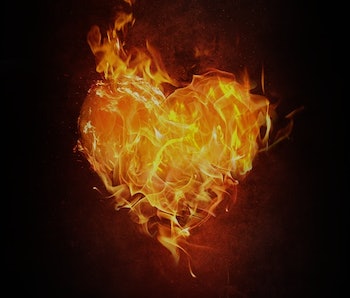 Complications like infections or perforations can arise in the operating room, but one man had a much closer brush with disaster, as doctors reported at the European Society of Anesthesiology’s conference on Sunday. During heart surgery, a fire flared up in his open chest cavity. This rare occurrence, one of his doctors tells Inverse, was the result of a very unique combination of circumstances. But despite the rarity of the occurrence, she fears it may become more common.

Dr. Ruth Shaylor, the anesthesiologist at Tel-Aviv Medical Center in Israel and Austin Health in Melbourne, Australia, who presented the case study, says the strange event began when a 60-year-old man needed emergency heart surgery at Austin Health. He was quickly under anesthesia to repair an aortic dissection, a tear in the lining of the massive blood vessel that carries blood from the heart to the rest of the body. Due to a chronic lung condition, the surgery required extra care.

“The patient had severe COPD” — chronic obstructive pulmonary disease — “which causes bullae (large air-filled sacs) to form in the lungs,” Shaylor tells Inverse. “One of these had stuck to his sternum,” the breast bone, which doctors had to crack open to access the heart.

“Despite being very careful during the operation, these bullae are very fragile, and one of them burst,” she says.

The doctors jumped into action. To minimize the patient’s risk of respiratory distress, they increased the flow of anesthetic gas and cranked up his supplemental oxygen saturation to 100 percent.

Smokey Bear, the famous icon of forest fire prevention, tells us that it takes three essential elements to start a fire: oxygen, heat, and fuel.

Pure oxygen, like the kind that pumped through the patient’s lungs and out through burst bullae, is extremely combustible.

During surgery, the doctors used a common tool called an electrocautery pen, an electronic device that generates high heat using an electrical current and is used to cauterize small wounds to quickly stop bleeding.

Fuel, the third ingredient, came in the form of dry surgical packs. These simple items are dry pieces of gauze that surgeons use to either absorb bodily fluids or hold tissues out of the way during surgery.

The combination of oxygen, heat, and fuel quickly turned into a small blaze inside the man’s open chest cavity, with the dry surgical packs igniting in conjunction with the pure oxygen and hot electrocautery device.

Shaylor reports that she and her fellow doctors quickly doused the flames with saline solution and checked for tissue damage. “There wasn’t any,” she says. The rest of the surgery went off without a hitch, and the patient was successfully treated for his aortic dissection.

It was a close call, but for Shaylor, it highlights a couple of key points. First of all, she notes that fires in the operating room have been reported seven previous times in the medical literature. In all seven cases, surgeons were using dry surgical packs. And five out of the seven previous cases “also involved patients with COPD, and the remaining two involved other lung diseases,” increasing the risk of leaking oxygen.

Surgeons should be aware of these risks, she emphasizes, pointing out that these incidents could start happening more often because the circumstances are so common.

In case you were wondering, Shaylor says the whole event was over too quickly for the doctors to snap any photos.

“Unfortunately, this was an emergency operation,” she says, “and we were too busy dealing with the fire and checking for damage to take pictures.”

Background: Operating room fires are a rare but potentially catastrophic occurrence. We report a case of a chest cavity fire associated with an air leak due to a ruptured bulla.

Case Report: A 60-year-old man presented for emergency repair of a type A aortic dissection. Past medical history was significant for chronic obstructive pulmonary disease and coronary artery bypass grafting one year prior. After induction, general anesthesia was maintained with inhaled sevoflurane (MAC 1) and intravenous propofol infusion (150 mg/hr). Surgery proceeded to sternotomy. At this point his right lung was noted to be adherent to the overlying sternum with prominent bullae. Despite careful dissection one of these bullae was punctured during sternotomy causing a significant air leak. In order to compensate for this the flows on the anesthetic machine were increased to 10 liters per minute and the proportion of inspired oxygen increased to 100%. Such was the extent of the leak that there were comments by the surgical team about the smell of sevoflurane. Shortly after this a dry pack in the presence of diathermy caught fire. This was immediately extinguished without any injury to the patient. The rest of the operation proceeded uneventfully and he had a successful debranching repair of his ascending aorta and arch.

Discussion: Chest cavity fires are an uncommon event. Prior to this there were 6 reported cases of chest cavity fire two involving thoracic surgery ad the remainder involving left internal mammary (LIMA) dissection for coronary bypass grafting. As in our case all involved the presence of dry surgical packs, electrocautery increased inspired oxygen concentrations and patients with underlying lung disease. None of the patients involved received any permanent damage. Ours is the first case reported of a chest cavity fire in a patient undergoing redo sternotomy and in cardiac surgery not involving dissection of the LIMA.

More like this
Science
6.28.2022 10:00 AM
How are drugs absorbed in the body? The science of medicine, explained
By Tom Anchordoquy and The Conversation
Science
6.26.2022 11:00 PM
The powerhouse of the cell has a more complicated origin than we thought
By Viviane Callier and Knowable Magazine
Science
6.21.2022 10:45 AM
Ancient stalagmites point to a massive drought that upturned 6th century Arabia
By Allison Parshall
Related Tags
Share: