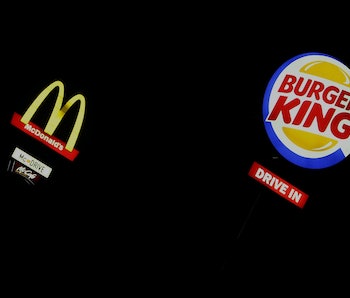 To celebrate world peace, Burger King wants to make a truce with McDonald’s, which is kind of like Canada making a truce with the United States apropos of nothing. Their proposal: the McWhopper, a combination of the Big Mac and the Whopper’s most desirable tidbits. The New York Times reports that the sandwich would exist for one day only (September 21) at a pop-up location in Atlanta.

Using the sandwiches’ helpful nutrition information pages, we’ve figured out the McWhopper has a whopping (yuk, yuk) 847 calories, 47.5 grams of fat, and 1,370 milligrams of sodium. That’s less than the two sandwiches combined, but more than either sandwich alone. The McWhopper is a glorious fucking abomination. It needs a better name.

Godspeed to anyone foolhardy and heart-foolish enough to tackle this corporate-cardiac mashup. Maybe try to wash it down with a Mountain Dew Sprite?