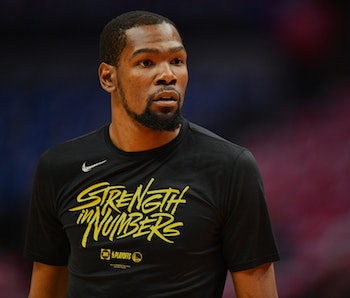 Will Kevin Durant make an appearance in the 2019 NBA Finals? The Golden State Warriors star has already been ruled out of Game 1 on Thursday, May 30, because of his left calf strain. Durant likely won’t travel with the team to Toronto to face the Raptors for either Game 1 or 2.

Durant said last week that his injury was worse than two previous calf strains. The Warriors might be a better team without Durant in the line-up, going 5-0 in their first five games after he was injured.

Travel days in the NBA Finals schedule give Durant a greater chance to come back, though. On Wednesday, June 5, the series moves back to the Bay Area for Game 3, followed by Game 4 on Friday, June 7, before a continent-crossing final three games, if necessary: Game 5’s in Toronto, Game 6 is in Oakland, and Game 7 is back in Toronto.

See also: Why the Underdog Raptors Have a Biological Advantage

The question looming over the NBA Finals is if Durant — who’s in the middle of a “contract-year frenzy” — is going to play.

To predict the answer to this big question about the 2019 NBA Finals, Inverse partnered with Unanimous A.I., which used its swarm intelligence technology. A “swarm” of more than 20 NBA enthusiasts worked together as a hive-mind to make their prediction. As you can see in the animation below, each participant controlled a golden magnet (using their computer mouse) to drag the puck toward the result they thought was the most likely outcome. This is where it gets interesting: As one user sees how other users are behaving, and watches the puck move toward a particular decision, it triggers a psychological response. They might readjust their thinking as the group builds toward a consensus. It’s an artificial intelligence, produced by human brains, working together as a swarm.

As you can see above, the swarm has low confidence that Durant will play in the Finals, a decision it made with 90 percent conviction.

With that information in mind, how many games will Kevin Durant play in the 2019 NBA Finals? The swarm predicts between 2-3 games, as this replay shows: