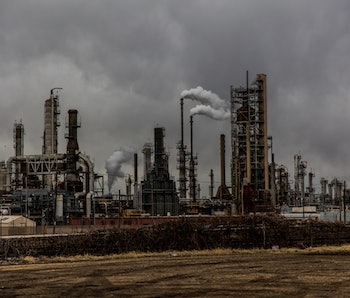 So far, the Trump administration has largely undercut climate change science by withdrawing its support for research and policies related to global warming. Now, its attacks have grown bolder, aiming to stifle the research itself. Instead of forecasting how Earth’s climate will change between now and the end of the century, the United States Geological Survey will only project changes up to the year 2040.

James Reilly, appointed in January by the president as director for the US Geological Survey, issued a decree, first reported by the New York Times:

James Reilly, a former astronaut and petroleum geologist, has ordered that scientific assessments produced by that office use only computer-generated climate models that project the impact of climate change through 2040, rather than through the end of the century, as had been done previously.

A spokesperson for the Geological Survey called previous uses of modeling “inaccurate” for focusing on “worst-case emissions scenarios” instead of “real-world conditions.”

Limiting predictions to the year 2040 is dangerous because the gravest effects of climate change will manifest after that year. Lancaster University mathematical modeler Dmitry Yumashev, Ph.D., who specializes in climate change models, explains to Inverse that the Trump administration “is doing this to eliminate the projections of what is going to happen with the Earth’s climate if we were to continue on the socio-economic pathway that we are currently on.”

"The current administration, of course, won’t be around to face the consequences."

In an email, University of Washington climatologist and Program on Climate Change director Cecilia Bitz, Ph.D., told Inverse why we must look past 2040: “My immediate reaction is that adults owe it to our children to figure out the dangerous consequences that our actions today will have on their future.”

The “business as usual” scenario is one in which we continue to use fossil fuels as our major energy source to sustain the growing global population and growing per capita incomes. If we stay on this path, we’ll see a four degree Celsius increase from pre-industrial temperatures by 2100, as the Intergovernmental Panel on Climate Change reported in 2013. But the majority of that change will occur after 2040.

The Trump administration, Yumashev says, “essentially wants to use a bit of a creative accounting to claim that ‘whatever we do, the temperature in 2040 is going to be more or less the same anyway,’ and that ‘the increase of several tenths of a degree C from present by 2040 is not that big —annual temperatures fluctuate by as much.’ With this perspective, it is easier to justify making no changes to our emissions and consumption patterns now.

Current models suggest that by 2040, the increase in global temperature will amount to only 1.5 degrees Celsius. The rest will come later. The reason for this is the well-established “lag” or “inertia” in climate systems that accounts for several factors behind the delay between cause and effect.

What Is Climate Inertia?

Several factors contribute to climate inertia. Foremost is the fact that the Earth does not respond to increased heat instantaneously. Just as ice cubes take time to melt but will inevitably leave a puddle if a certain heat threshold is met, the ice sheets and permafrost may not leave their puddle by 2040 — but that doesn’t mean they won’t eventually.

On the flip side, even if we were to cut emissions today, inertia would cause the planet to continue warming for another 10 to 20 years because of the slow rate at which heat dissipates into the oceans, Yumashev explains.

Then there is the fact that humans, like the climate, also suffer from a form of inertia. We can’t assume that population growth will suddenly slow down, that economic activities will suddenly shift toward a trend of decreased consumption, and that technology will suddenly evolve more rapidly, explains Yumashev. And so, when scientists predict what could happen if we change our behavior, they must take into account how slow humans are in getting their act together.

Planetary and human delays are the reason the Trump administration can capitalize on predictions that end in the year 2040 — and is threatened by those that come after.

“All these factors mean that demand for energy (and also for land resources) will continue to grow, leading to emissions well beyond 2040 under all plausible socio-economic futures of the world put forward by IPCC,” says Yumashev. “In fact, the extent of climate warming associated with the different socio-economic pathways only starts to become different after 2040, with the most significant differences occurring in the latter parts of the 21st century.”

Climate Models Have Been Shown to Be Accurate

The USGS argument that climate models past the year 2040 are “inaccurate” is “highly flawed and is clearly politicized,” says Yumashev, who warns that the results of modeling “should not be taken out of context for political reasons.”

"Denying the risks amounts to a crime against humanity."

Independent assessments by other scientists have verified the predictions of previous models. The 2013 IPCC report, for one, showed that predictions made in 1990 were correct, noting:

The 1990–2012 data have been shown to be consistent with the [1990 IPCC report] projections, and not consistent with zero trend from 1990 … the trend in globally-averaged surface temperatures falls within the range of the previous IPCC projections.

According to Yumashev, the Earth last experienced rapid temperature changes of the current magnitude during the Paleocene-Eocene Thermal Maximum around 56 million years ago, and the effects, which included a mass extinction, occurred over the next 200,000 years. They were caused by volcano-derived greenhouse gases entering the atmosphere — but that occurred slowly, over 20,000 years.

Our situation is very different because of the rate at which it is occurring. “We are doing this within a century and with up to 10 billion people,” says Yumashev. In other words, what is happening is unprecedented, which is why we rely on models to predict what will happen as this pattern continues — and why we must think in timescales long enough for the effects to manifest.

“Denying the risks amounts to a crime against humanity,” he says. “The current administration, of course, won’t be around to face the consequences.”

For additional information about the studies mentioned in this article, check out the papers below: