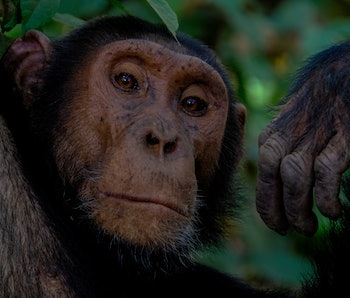 Chimpanzees, humans’ closest relatives, have been known to eat a rich and varied diet including, but not limited to, Mountain Dew and baby chimps. Now, for the first time, we can add tortoises to that list, thanks to a new paper published Thursday in Scientific Reports. In addition to showing a new food source, the videos depict sophisticated behaviors never before seen in chimps.

In the paper, the team from the University of Osnabrück and the Max Planck Institute for Evolutionary Anthropology describe chimpanzees in Gabon’s Loango National Park eating 34 hinge-back tortoises between July 2016 and June 2018. Ten different chimpanzees, mostly males, were observed catching tortoises and smashing their shells against hard surfaces like trees and rocks — a practice so common among this particular chimp community that the researchers call it a “custom.” Sort of like humans shelling pistachios or shucking oysters, it’s just a thing that is done.

“Overall, we found that tortoise predation is a customary behavior in the Rekambo community, regularly done by all adult males,” the team writes. “It most frequently consisted of a distinct sequence of behaviors involving the discovery of the prey, transportation of the prey to a suitable anvil, smashing of the plastron, and feeding on the meat.”

After smashing the plastron (a tortoise’s shell), a chimp would usually climb a tree and then eat the insides, sometimes smashing the shell again on a branch. As the video below shows, chimps sometimes also munched on leaves while scooping out the meat.

Notably, the chimpanzees in this community often shared the tortoise meat with each other. The only time they didn’t share, write the study’s authors, was when the tortoise smasher was alone and others didn’t approach them. In some cases, chimpanzees who unsuccessfully attempted to smash the tortoises ended up being given meat by the chimp who was successful.

As shown in the video below, chimpanzees freely shared the tortoise meat with the other members of their community.

Evidence That Chimps Think Ahead

Besides being kind of a neat discovery, these observations reveal new insights on chimpanzee behavior and cognition.

First of all, smashing tortoise shells on rocks and trees represents what scientists call “proto-tool use.” A tool is defined as an implement that a chimp holds and manipulates, much as it might when it uses sticks to harvest termites from their mounds. In this case, the rocks that the prey are smashed against are stationary objects, so they don’t qualify as tools — they are “percussive” technologies instead.

“However, the use of a percussive technology to gain access to tortoises’ interior has never previously been described in a nonhuman primate species,” they write.

More significant is the fact that the chimpanzees stored leftovers, suggesting some degree of foresight. One chimpanzee was seen storing a partly eaten tortoise carcass in the fork of a tree and coming back to eat it the next day. The solitary male, who didn’t have anyone to share the half-eaten tortoise with, appeared to display future planning that merits future study. Before now, the authors write, future-oriented cognition has been considered a quality unique to humans. But this observation may force us to rethink that.

“In sum, our findings strongly emphasize the versatility and diversity of chimpanzees’ percussive technology and provide further support for their exceptionally large and flexible cognitive tool kits.”

Abstract: Chimpanzees (Pan troglodytes), one of humankinds’ closest living relatives, are known to hunt and consume the meat of various animal taxa. Although some researchers have presented indirect evidence that chimpanzees may also prey on tortoises, until now, direct observations of this behaviour did not exist. Here, we provide systematic descriptions of the first observations of chimpanzee predation on tortoises (Kinixys erosa). We made these unprecedented observations on newly habituated chimpanzees (Pan troglodytes troglodytes) of the Rekambo community, living in the Loango National Park, Gabon. The behaviour qualified as customary, that is occurring in most or all adult males, involved a distinct smashing technique, and resulted frequently in food sharing with other group members. our observations shed new light on the hitherto little understood percussive technology of chimpanzees, and expand our current knowledge on chimpanzees’ dietary and predatory repertoires with respect to reptiles. We also report a case of food storage and discuss it in the context of future-oriented cognition. Our findings suggest the need for more nuanced interpretations of chimpanzees’ cognitive skills in combination with an in-depth understanding of their unique socio-ecological niches. they further emphasize the importance of nonhuman primate field observations to inform theories of hominin evolution.

More like this
Science
Feb. 5, 2023
The Plague Is Still Here — And It Could Infect Your Cat
By Tara Yarlagadda
Science
Feb. 1, 2023
Look! Five New Snake Species Discovered in a Habitat Devastated by Mining
By Robin Bea
Science
Jan. 29, 2023
Are coyotes dangerous to dogs and cats? Here’s how to keep your pets safe
By Tara Yarlagadda
LEARN SOMETHING NEW EVERY DAY.
Related Tags
Share: