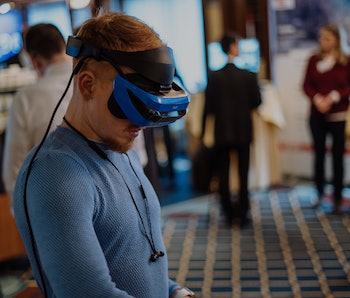 VR gaming remains in its infancy. NVIDIA recently estimated that some 4 million VR rigs have been sold in total, less than a third of the number of PS 4s that Sony sells each year. Only recently, manufacturers like Oculus have figured out to how to fit enough hardware into a single headset to let you play without a gaming PC.

In this landscape, it would seem reasonable to assume that VR streaming would be lightyears away. After all, why set up the infrastructure to support cloud-based VR gaming if there are, at most, only 4 million potential customers?

To the contrary, VR-based cloud streaming could be consumer ready within the year. Contrary to the common perception that next-gen game streaming will require next-gen bandwidth infrastructure, Asher Kagan, CEO of the cloud gaming company Shadow, tells Inverse that the tech for immersive VR streaming is already here, and can already be enjoyed without big hardware spends.

His prediction is surprising, because even the more traditional game streaming services like Stadia and xCloud are still being tested, and are likely looking ahead to the eventual roll-out of 5G as the time when they will truly become mainstream.

“Cloud computing is going to affect various other entertainment verticals and VR is amongst them,” he said. “[Shadow] will definitely [offer cloud-based VR gaming] when 5G becomes more accessible, but maybe even before.”

During its March 2018 U.S. beta test, Kagan says Shadow — which allows its customers to essentially rent computing power from the cloud using its servers — developed an algorithm capable of optimizing each users’ game quality based on their individual internet connection. If a subscriber’s speed drops over the weekend because everyone in their neighborhood is online, Shadow will tweaking the resolution, refresh rate, and frame rate to avoid any lags.

The service requires users to have a minimum of 15 Mbps internet speeds, which is notably lower than Stadia’s 20 to 25 Mbps minimum. The average American household has access to download speeds of 96.25 Mbps and upload speeds of 32.88 Mbps in 2018, according to broadband metrics service Speedtest. These numbers can vary greatly from state-to-state, which Shadow hopes to address with its algorithm.

Kagan thinks this solution can serve as the groundwork for a seamless and affordable cloud VR experience. Currently, most VR experiences require thousands of dollars worth of equipment. But companies like Oculus are developing more affordable, standalone headsets that don’t require a PC to run.

Shadow wants to take that a step further. Instead of housing a computer inside a headset, like the Oculus Quest, Kagan envisions headsets as simply smart devices that can tap into cloud computers to display games and interactive entertainment.

“Consumers don’t only need an expensive PC just to run the games, but they need to have all of the cables all the friction that’s actually making it a bit of a complicated experience to utilize,” said Kagan. “We see cloud streaming tech removing all of that and streaming content directly into VR glasses.”

To be sure, adapting this tech to transfer VR video and game data from cloud servers will require substantially higher internet speeds. Telecommunications company ARRIS calculated that a 720p VR video stream takes a minimum of 50 Mbps in 2016, more than triple Shadow’s minimum requirement for standard gaming. 5G has been said to deliver home wifi speeds of up to 1 Gbps (or 1,000 Mbps) by certain carriers, but nationwide coverage might not be available for another few years.

Until then, Shadow’s vision for VR cloud gaming without 5G remains ambitious. But as Shadow’s latency balancing algorithm shows, there are tech fixes that allow cloud services to do more with less. Particularly given VR’s status as a relatively small, emerging market, companies may be able to make cloud-based VR gaming available en masse a lot sooner that you’d think.