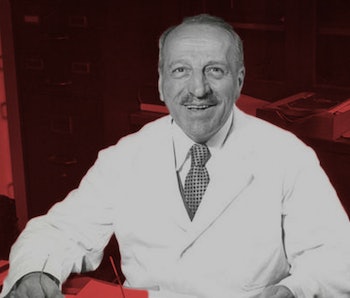 In the early 20th century, cervical cancer was the most fatal of cancer in the United States, killing 40,000 women a year. But until a Greek immigrant named Dr. Georgios Papanikolaou came along in 1913, there was no good way to catch its warning signs before the disease took hold. Papanikolaou, whose 136th birthday is commemorated with a Google Doodle on Monday, is the inventor and namesake of the Pap smear, a cancer screening technique that was as revolutionary as it was controversial at the time.

He began his US research career in New York in 1914, studying the cells swabbed from the vaginal tracts of guinea pigs at Cornell University Medical College’s Department of Anatomy, where his wife, Mary, worked alongside him as a technician. At the time, cancer screening relied heavily on biopsies of cancerous tissues, which required surgery.

By studying the shapes of cancer cells from vaginal swabs of both animals and humans and comparing them to healthy ones — some of which he first observed in cells from his wife — he established that it was possible to detect cancerous cells without putting patients under the knife.

But the medical community was not impressed when Papanikolaou presented his findings at the Third Race Betterment Conference (a very problematic meeting, in retrospect) in Battle Creek, Michigan, in January 1928.

"His technique was initially considered an unnecessary addition."

His student, Dr. Neda Voutsa-Perdiki, recalled in a 2017 interview that “this potential medical breakthrough was initially met with skepticism and resistance from the scientific community at that time, and his technique was initially considered an unnecessary addition to the existing diagnostic methods for cervical cancer.”

The authors of the textbook Colposcopy of Female Genital Tract note that the skepticism and resistance to Papanikolaou’s methods resulted in the medical community to take “over a decade to validate the diagnostic potential of the vaginal smear.”

The field of science he was cultivating is now known as exfoliative cytology — the study of cells shed from the body — but was not a particularly hot topic in the medical community at that time. Exfoliative cytology “was not a common practice in those days, as pathologists relied heavily on tissue biopsy for diagnosis of cancer,” said Dr. Rema Rao of the Papanicolaou Cytopathology Laboratory at NewYork-Presbyterian Hospital in an interview.

However, the American community’s resistance to his research may have also stemmed from a communication barrier and a lack of faith in foreign ideas. “Because he was Greek and he didn’t learn to speak English very well, a lot of what he presented apparently had spelling errors,” said Rao. “He struggled to communicate to the medical community what he was trying to say.”

Standing by the importance of his findings, Papanikolaou continued his research, and eventually, the life-changing impact of the Pap smear was recognized starting in the ‘40s. The American Cancer Society takes credit for its widespread acceptance, noting on its website: “At first, most doctors were skeptical, and it was not until the American Cancer Society (ACS) promoted the test during the early 1960s that this test became widely used.”

Thanks in large part to Papanikolaou’s persistence and his support of the Pap smear, the number of deaths due to cervical cancer have dropped 70 percent in the US since the ‘50s. Today, the Pap smear continues to be one of the most widely used — and effective — cancer screening techniques in the world.