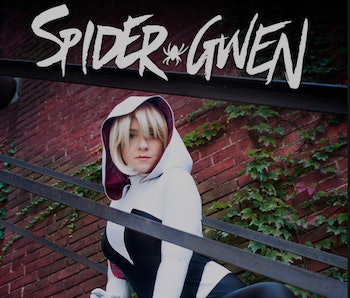 At its best, cosplay is a celebration of characters people love and the stories that give them meaning. At its worst, it’s a selfish vanity project for hot people, but who cares about them. This October, Marvel is giving attention to the awesome former group by putting real cosplayers on the covers of its current titles.

“Each convention I go to, it seems like there are more and more fans dressing up like their favorite Marvel characters. These homemade, hand-crafted costumes are so elaborate, it looks like they leapt off the comic page. The Cosplay Variant initiative is our way of supporting a community that supports us,” says David Gabriel, Marvel senior VP of marketing to ScreenCrush.

The great thing about these covers is that the cosplayers on them are real people. They don’t look like Armani models wearing expensive wares, they’re just enthusiasts who slave over a sewing needle for fun. Yeah, some look better than others, but that’s not the point. It’s passion, and this is a celebration, not a contest.

Though I will express my disappointment that these covers are quite lacking in people of color. For all the diversity Marvel champions, they didn’t feature many cosplayers who race or even genderbent their heroes. On one hand, it makes sense: If you read Spider-Gwen you’re getting Gwen Stacy who is white, but on the other every little reminder that comics are for everyone is appreciated.

There are 20 covers in all, with 19 circulating online (the last one is a super secret, for some reason). Here are a few of the coolest-looking.

Update 8/26: I was notified on Twitter that I was incorrect saying that there weren’t “any” cosplayers who racebent or genderbent these heroes. A few actually were. The article has been edited to correct that mistake.