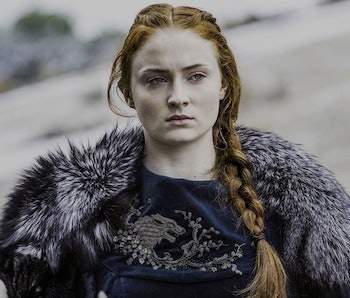 With so many Game of Thrones characters fighting for the Iron Throne, Sansa Stark may prove to be the most capable politician by Season 8’s end. Daenerys Targaryen and Jon Snow have been the leading contenders to rule over the Seven Kingdoms for a while now, but a new theory suggests Game of Thrones Season 8 may surprise everyone and end the series with the Lady of Winterfell ruling all of Westeros.

In a post to the FanTheories subreddit, redditor u/aisforartichoke argues that Game of Thrones will end with an unexpected twist as Sansa claims the Iron Throne. They note that while other characters only think of themselves or how to maintain power, Sansa “considers how to actually take care of her people and make sure they have enough food, etc.”

Though u/aisforartichoke argues that Sansa only says things that are “helpful” because everyone else is “being shortsighted,” the Lady of Winterfell has proven herself to be one of the smartest political players in Westeros. She’s patient, tactical, and offers up no-nonsense advice when everyone else seems intent on making power moves without looking at the bigger picture. Sansa helped Jon win the Battle of the Bastards in Season 6 by calling on the Knights of the Vale, and she worked with Arya and Bran to outsmart Littlefinger and have him executed for treason in Season 7. She is an immovable force and loyal to her people.

While Daenerys and Jon may want to dive head first into the fight against Cersei, Sansa has been thinking about her people first. In Episode 4, she suggested that the armies needed rest before heading to King’s Landing, and, though Tyrion was trying to appeal to Cersei’s humanity, Sansa is skeptical of the Mother of Dragons given their history. She knows Cersei can’t be trusted, and no amount of words could sway her.

There’s no doubt Sansa would make a good leader, but how could she take the Iron Throne in the first place?

This theory hinges on three things happening for Sansa to rule. The first is that Daenerys turns into the Mad Queen. That means someone (possibly Jon) would have to defeat her. Dany’s already lost so much, and Game of Thrones certainly seems to be headed in that direction.

Meanwhile, Cersei has a lot of enemies ready to take her out. From Daenerys and Jon to her brothers Jaime and Tyrion. Additionally, the Valonqar Prophecy, which states that Cersei will be killed by a “little brother,” has yet to be fulfilled (or mentioned) on the show.

It’s also possible that Jon could die in battle or be forced to kill Daenerys. Even if he stays alive, Jon’s goal was never to rule (nor does he seem to want to), and Episode 4 suggested he might return to the North when the fighting is through. After all, Melisandre did bring him back for a reason, but that reason may not have been to be king. If Jon does end up having to kill Daenerys before either sacrificing himself or returning north, Sansa could end up on the Iron Throne.

At this point, there’s no telling what the writers of Game of Thrones have up their sleeve, and we no longer have George R. R. Martin’s books as a guide. When all is said and done, however, Sansa, being the most level-headed of everyone right now, would be the only remaining leader fully equipped to rule.