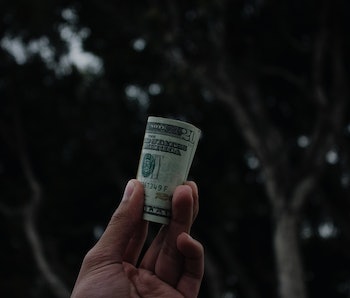 Which would you prefer: unconditional money or unconditional access to a job? A battle is underway to decide how future generations will contend with income gaps and provide everyone with a minimum standard of living. As job losses from artificial intelligence and growing automation continue to mount, it’s a debate that could grow into a full-fledged battle.

A “job guarantee” is an idea that’s gained traction with Democratic presidential candidates, including Bernie Sanders, Elizabeth Warren, and Cory Booker. Activists in the Democratic Socialists of America have also voiced their support. The policy generally involves giving a $15 per hour full-time job, complete with benefits, for anyone who wants a job working for the federal government.

It sounds like a means of guaranteeing employment for all who want it, fending off the worst effects of job losses as a changing economy relies more on automation. A lot of these jobs would involve taking care of the very young, as teachers’ aids or enrichment counselors, or the very old, as our population ages.

Others argue that we should cut the inefficiencies of having to employ people and simply cut everyone a check. Advocates for a basic income argue that giving everyone a fixed monthly wage, pitched by Andrew Yang at $1,000 a month, could provide people with better economic freedom and avoid trapping them in bad jobs.

Guy Standing, a basic income advocate and a research associate at SOAS, University of London, argued in a report released Tuesday that job guarantees would not solve these problems anywhere near as effectively as a basic income.

“Rather than jobs per se, the primary challenge is to build a new income distribution system, recognizing that the old one has broken down irretrievably,” Standing wrote in the report. “The rentiers are running away with all the revenue thrown up by rentier capitalism, and real wages will continue to lag. Putting people into static low-wage jobs is no response.”

A Job guarantee, Standing argues, is riddled with problems. It would perpetuate low productivity, as employers wouldn’t care about the work and employees would have no incentive to work hard. It would involve the government taking on a more paternalistic role, putting it in a position where it may wind up deciding for people the job that’s best for them. It could also encourage people to quit their jobs to take on more secure guaranteed positions, raising the projected cost of the policy.

The idea also raises difficult questions about what happens if someone chooses not to take the job. Would they be shunned from unemployment benefits, dismissed as work-shy? Standing claims that studies demonstrate how people accepting a job below their qualifications can affect their later income, meaning there are valid reasons for turning down a low-wage job.

Standing isn’t the first to criticize a job guarantee. Vox writer Danielle Kurtzleben analyzed a similar policy outlined in Netflix’s House of Cards, dismissing Frank Underwood’s “America Works” program as “bonkers.” Kurtzleben noted that “full employment” is normally taken to mean that nobody is out of a job due to cyclical economic reasons like a recession. It does not mean 100 percent employment, as “frictional” unemployment from people moving jobs is arguably beneficial. A job guarantee also provides questionable benefits for solving “structural” unemployment, where jobs and unemployed people exist but they’re not right for each other.

Standing’s report, “Basic Income as Common Dividends: Piloting a Transformative Policy,” was written for the opposition British Labor Party’s financial spokesperson (or “shadow chancellor”), John McDonnell. The shadow chancellor described it at the launch event as an “important contribution to the debate around inequality, austerity, poverty and how we establish a fair and just economic system.” McDonnell did not, however, commit the party to supporting the policy.

The rest of Standing’s report argues for a basic income pilot to study its effects. Similar trials have been conducted in Finland and Ontario, and have been shown to offer health benefits and encourage greater trust in political structures. Campaigners have advocated for introducing a scheme in Sheffield, which narrowly voted for Brexit three years ago, arguing that it could help reduce inequality.

While more Democratic presidential candidates support a job guarantee over a basic income, there’s one major exception to the rule. Andrew Yang has proposed a $1,000 per month payout to all, funded by a value-added tax. He has outwardly dismissed the idea of job guarantees.

Bernie Sanders, on the other hand, has flatly refused to follow Yang in supporting a basic income, hailing job guarantees as a better use of resources. He said during an April 2019 discussion in Iowa, in response to a question on Yang’s policy, that “there is so much work to be done” in the country, pointing to crumbling infrastructure and transitioning to renewable energy. Sanders added that “what we believe in is guaranteeing a job in this country to anybody who is prepared to work. I think that’s the better approach.”

With the Democratic primaries fast approaching, it could become a major point of contention among the candidates vying to take on Trump.