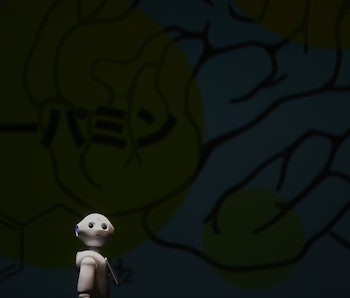 The future of the web is A.I. duplicates of all your dead friends posting to social media forever, and ever, until the servers go dark. At least one company hopes.

Portuguese developer Henrique Jorge’s Eter9 is still in beta testing, but it aims to learn users’ personalities so that it can post in their image long after they’ve upgraded beyond this mortal operating system. Their site is set up similarly to Facebook, with a main page that functions as the news feed and a “cortex” in place of a profile. About 5,000 people have signed up, all functionally teaching the system about themselves and controlling just how much activity their counterpart will have. Some let it post while they’re offline, and if they want to meet their mirror image (hopefully) before they die, they can.

This paradox here is that our social media selves are disingenuous. They are idealized and scrubbed and bold enough to shout things we probably keep to ourselves in flesh and blood interactions. Your idea of the most palatable you. If the ghost is, at best, a copy of a projection, would you even recognize your friend in it?

So why would people want to spend their afterlife in a state that makes them miserable? Well, maybe they don’t. As the BBC reports, a similar idea was tried before when a site called Virtual Eternity launched in 2010, allowing users to train their avatar with personality tests, images, and a voice profile. Only 10,000 people signed up and by 2012 Virtual Eternity was buried.

More like this
Culture
6.30.2022 11:30 AM
You need to watch David Fincher's most important techno-thriller before it leaves Netflix this week
By Eric Francisco
Science
6.30.2022 10:15 AM
This "city killer" asteroid won't hit Earth after all
By Andrew Moseman
Innovation
7.1.2022 10:00 AM
Robots are ready to get touchy-feely
By Sarah Wells
Share: