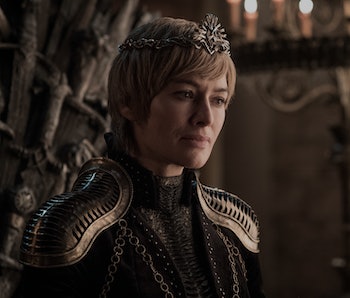 No one actually believes that Cersei Lannister is going to remain on the Iron Throne when Game of Thrones ends on May 19, 2019, but we should all enjoy the final moments in her story. She’s only poised to become one of TV’s most memorable anti-heroes in a series where she’s far from the lead. Cersei has increasingly become the embodiment of the adult world’s cruelty in a series that largely relies on young protagonists who are still figuring out their own identities to drive the story.

In this final season, Cersei’s plans have worked out too well, though, setting up her inevitable, spectacular, fall — but it’s not one that we’ll enjoy watching. As a villain you root for, she’s made impossibly cold decisions in previous seasons. She destroyed the Great Sept of Baelor with lime-green wildfire, killing her enemies and their supporters; it was as much an act of revenge as a power grab. It resulted in her own son, the boy king Tommen, committing suicide (she assumed his role as ruler, you’ll remember).

And in the Season 8 premiere, with the Night King approaching and all humanity seemingly doomed, the Queen of the Seven Kingdoms declared:

The monsters are real. Dragons, White Walkers, Dothraki screamers. Let the monsters kill each other. We will deal with whatever is left.

As we saw on Sunday night, the Queen called it. This vindicated a presumed minority of audiences, myself included, who have found her storyline over the course of the series to be one of the most rewarding for its emotional complexity, maturity, and tragedy.

In series derided by one of its own as being mostly nudity and dragons, the story of Cersei, however outlandish (…incest), has felt like the one about an adult who lives in a world of ice zombies, warging, and confused teens: Jon Snow has figured out he literally has a different identity. Daenerys Targaryen’s life might be different as a result. Sansa and Arya Stark are as unsure about their paths as ever, albeit in markedly different styles. Bran is also literally something else now. But Cersei’s so confident in her own identity that’s it been easy for her to resist playing along, even while members of her own family do.

After the Great Battle of Winterfell, with its cathartic deaths, lost direwolves, and unresolved dragon fates, Cersei was proven right.

She now claims a fighting force — Euron Greyjoy’s sailing Ironborn, the Golden Company, and the Lannister army — that will face at least one dragon and the motivated ranks who have beat the Night King. Cersei is going to eventually lose, like all anti-heroes we root for do.

If Game of Thrones, post-George R.R. Martin, has respected one ideal to a surprising degree, it’s putting out a story that’s in service to fans. David Benioff and Dan Weiss, who have led the narrative since the storyline raced past Martin’s books ended during Season 5 in 2014, will likely show Cersei losing in dramatic style, whether it be a result of “Cersei’s prophecy” or something else.

Her fate is probably sealed — as appealing as a scenario where she actually wins might be — but in Sunday night’s episode, Cersei correctly predicted the outcome and saved her armies to fight another day, even from an inscrutable distance away in King’s Landing.

Cersei’s decision to not enter the battle against the Night King might’ve felt like a gamble, but her choice — based on arrogance, cunning, or fear of losing — paid off.

"We will deal with whatever is left."

While she may eventually die at the hands of her younger brother (Jaime the tragic choice; Tyrion the melancholy one), Cersei has already shown herself to be smarter, in this moment, than the rest of the power-brokers in this epic, by sitting out the Great Battle of Winterfell.

She’s proven herself to be painfully human, not just in her appearances in Season 8, but in the entire series: She’s an egomaniac, paranoid, cruel, vulnerable, and weak. We witness a blend of those traits in early seasons, and as she ascends to power in the second half of the series, we see them undiluted and free from whatever social norms might’ve applied to a monarch during the life of her late husband, Robert Baratheon.

Cersei is out of the cage, and I hope we see more of it in the final episodes of the series.

Cersei Is the Anti-Hero Game of Thrones Needs

Cersei is the anti-hero Game of Thrones needs in its final chapters. The Night King proved to be a one-dimensional bad guy, no match for the cunning bravery of series icon Arya Stark. What was once viewed as a unique threat so powerful and mysterious that it required alignment of historic enemies, quickly shattered like a glass unicorn dropped on the floor. As villain deaths go, it was a let-down. And the Night King’s cultural legacy won’t claim much more than a “Come at Me Bro” meme.

Meanwhile, Cersei’s character should live on in our minds, despite the demographic history that’s against of her: Basically, men who we enjoy watching do terrible things. Don Draper, Walter White, Tony Soprano, Omar Little … and now, Cersei Lannister. There are whole slideshows of mostly white dudes who enjoy Being Bad Without Consequences. Can somebody please update the slideshow?

As we see in Game of Thrones, it’s legacy time for Cersei Lannister. She is smarter, just as flawed, and just as cruel as any of prestige TV’s anti-heroes, and has destroyed the ice queen stereotype in the process, as actress Lena Heady’s memorable performance brought the literary villain to life. She might lose the war for the Seven Kingdoms, but when it’s all over, Cersei may be one of the few characters that spurs you to rewatch the series.