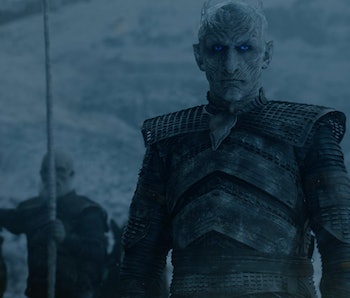 Listen, it’s anyone’s guess how the Battle of Winterfell will pan out on Game of Thrones, and it will be even more difficult to tell if Jon Snow’s plan to lure the Night King into the godswood at Winterfell to destroy him will actually work. Even the best laid plans have their own flaws and, as one Reddit theory posits, there may be clues staring us right in the face that it could be a dangerous mistake to assume the Night King is marching to Winterfell with the rest of his army, thus making it easy to get close to him.

The new and improved Game of Thrones opening credits, which debuted before the second episode this past Sunday, have spoiled the Night King’s attack plans and indicated he has no intentions of showing up at Winterfell. Seeing as the opening credits have already given root to [other theories possibly coming true, like the Azor Ahai prophecy, it’s not entirely unreasonable that more than one major clue is buried in the two-minute sequence.

According to redditor u/jeetermeat, the new opening credits for Season 8 are teasing what the Night King has in mind — and it doesn’t involve going to Winterfell. Instead, the Night King just might be headed to King’s Landing after turning the Umber homestead, the Last Hearth, into a zombified hellscape that would make George Romero jealous.

Jeetermeat argues that at around the 0:16 mark, you can see the camera movement spiral around the Last Hearth on the map of Westeros before diving down to ground level. And at the 1:13 mark, the camera looks down and into King’s Landing and eventually dives down into a tower following a spiral staircase that appears to move in the same way.

The general idea here is that the spiraling movement of the camera is meant to mimic the White Walker’s spiral symbol, which reappeared in the Season 8 premiere and was initially spotted in the Season 1 premiere. Since the spiraling camera movement appears to happen over the Last Hearth and King’s Landing in these credits and, furthermore, since we know the Last Hearth has already fallen, Jeetermeat concludes the Night King is heading to King’s Landing next, as if he’s already marked it on the map with his spiral symbol.

It’s tough to get completely behind this theory. It means we have to wholeheartedly believe the Night King’s plan would be so plainly telegraphed in the opening credits and that it’s undoubtedly true despite there being little to no evidence in the show that that’s actually going to happen. But it does make sense that the Night King would dodge assured destruction at the hands of a massive human army, two dragons, and Bran (the one person who has a connection with him who is also his Achilles’ heel).

It also makes sense that if the Night King wants to usher in the Long Night and rule over Westeros, he’d just hop on zombie dragon Viserion and go right to the place where the Iron Throne is located. It also helps that Cersei is chilling out at King’s Landing, feeling untouchable as hell. And sure, she has the upper hand; a surprise attack from the one enemy she never believed would make it to her doorstep would be a perfect twist.

At the same time, there have been no blatant indications that the Night King isn’t at Winterfell. We didn’t see him in the lineup amongst his generals at the end of Episode 2, “A Knight of the Seven Kingdoms,” but that could be because the show wants to make a grand entrance of him riding on Viserion into battle.

Similarly, Tormund, Beric, Dolorous Edd, and the rest of the Wildling/Night’s Watch survivors seemed confident the Night King was still leading the undead to Winterfell. Also, considering they were the last ones to see the destruction at the Last Hearth, and made a point to circle around the army as they marched, it stands to reason they got a gander at the army and spotted the Night King.

At the end of the day, don’t discount Jeetermeat’s theory. But also, maybe don’t place all of your bets on the opening credits calling the Night King’s shot so boldly, either.