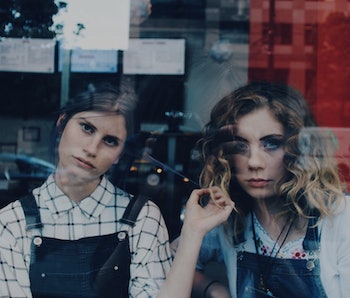 Most parents can remember the subtle mix of excitement and anxiety accompanying the choice of their baby’s name — it will follow the child their entire life. But the effect could be even more significant. In research published in the Journal of Personality and Social Psychology, our research team shows that the stereotype that a given society has of a first name can influence the way people look.

In eight studies, we found that participants shown ID-style photos of people they’d never met were able to recognize the first name of the depicted person well above the chance level. For example, let’s say you live in North America and are shown a picture of a woman whose name is Emily (you aren’t given this information). Below her image, four possible first names are listed: Claire, Deborah, Emily, and Melissa. Assuming that the first names are equally common in North America in/around the year that the person was born, study participants should pick the correct name approximately 25% of the time — in other words, by chance. What we found is that participants typically choose the depicted person’s true first name 35% to 40% of the time. There is something about an Emily that …just looks like an Emily.

If an Emily really does look like an Emily, even a computer should be able to guess her true name. And that is what we find, across dozens of names. We had a computer analyze almost 100,000 ID portraits of French people. Across the board, the computer was able to recognize the person’s true first name above the rate of pure chance. In fact, the computer was even able to produce a “heat map” for each name, a face with the features that “betray” a person carrying that name shown in warm colors.

Here are a few examples of women’s names from our study:

And here are some for typical French men’s names:

How should we understand this effect? Until now, social psychologists knew that our facial appearance influences the extent to which others perceive us as attractive, intelligent, trustworthy, or warm. This study shows that others’ perceptions of our first name is reflected in our faces.

How is that possible? Our theory is that when a child receives a first name, it comes loaded with a number of social expectations, inferences, and interactions. It is possible that this child be treated as though they have certain personality traits — for example, a Katherine may be a good student, while an Allison may be mischievous. The social attitude toward a first name, along with its continuous pressure on the person wearing that name, can influence the perception that the name-wearer has of themselves, and end up weighing on the development of their appearance. For instance, Allison may end up adopting a hairstyle, expressions, or specific facial traits (e.g. smile lines) consistent with the stereotype of an Allison that her cultural group has in mind.

Self-fulfilling prophecy is already well-documented as far as personality is concerned. For example, given the stereotype that Chinese people tend to excel at mathematics, a Chinese woman being reminded of the fact she is Chinese tends to perceive herself as better at the subject compared to a Chinese woman being reminded of the fact that she is a woman. What is new with our research is it shows our tendency to adhere to social stereotypes that end up appearing on our face, at least via the social cues that our first name represents. This may happen either directly (e.g. Allison wears her hair down; Angelina ties it up) or work via the effect of a first name on people’s personality (e.g. a first name may be associated with someone who is open-minded, which would then translate to a more open-looking face).

We, therefore, identify a type of Dorian Gray effect, from the lead protagonist in Oscar Wilde’s novel, whose portrait evolves as he carries out dark acts. The fact that our first name, chosen by others for us, shapes our appearance in adulthood suggests a powerful social structuring that affects us from early on in our life.

The face-name effect — the fact that we recognize the first name of someone we don’t know beyond chance level — does have its limits. These limits further illustrate the self-fulfilling mechanism behind it.

First of all, we find that individuals of a given culture display the face-name effect when looking at pictures of individuals from their culture, but no longer recognize the name when the pictures are of individuals from another culture. In one of our studies, we asked French and Israeli participants to recognize the true name of French and Israeli people they did not know. The face-name effect occurred for French people confronted with French faces, as well as for Israelis confronted with Israeli faces. It did not occur for French people confronted with Israeli faces or Israelis confronted with French faces. In other words, perceivers no longer recognized the depicted people’s true name above chance level when the latter were not from their culture.

In another study we found that if the people depicted do not use their first name socially, but instead exclusively use a nickname (e.g. Charlotte does not go by Charlotte but by “Chachou”), the face-name effect disappears, and people no longer recognize Charlotte as a Charlotte. Again, this is consistent with the fact that the name-wearer undergoes a social pressure when she or he morphs their face to tend toward the social stereotype of their first name. When exclusively using a nickname, for which there is no shared stereotype, this pressure disappears.

Finally, the face-name effect occurs even if we can only see the hair of a person. Our hair is possibly the part of our face that we control with the most ease. The fact that this alone can produce the face-name effect further illustrates the suspected self-fulfilling mechanism behind it.

Together, the eight studies suggest that we wear our social belonging on our face, and that we actively shape our features to be recognized by our reference group. Choosing baby names remains exciting. Whatever the first name you give to your child, they will end up wearing it.

This article was originally published on The Conversation by Anne-Laure Sellier. Read the original article.