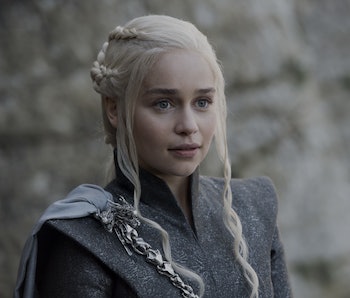 For years, Daenerys Targaryen believed she could no longer have children, but that may change in Game of Thrones Season 8. Back in Season 1, Daenerys asked when her husband, Khal Drogo, would get well and the witch Mirri Maz Duur replied, not until the “sun has risen in the west.” Now, a new interpretation of that prophecy could explain how Dany might already be pregnant with Jon Snow’s child.

It all comes down to how you interpret the words the “sun has risen in the west.” Redditor u/WhyDidTip theorizes that, while the original prophecy mentioned the sun rising, Mirri Maz Duur may have meant “son.”

That’s where Jon Snow comes in. In Season 8, Episode 2, Daenerys learned that Jon was, in fact, her brother Rhaegar’s true born son and the last male heir to the Iron Throne.

“Not only is Jon the son, but his story is littered with different times he has risen. He rose to lead the night’s watch, rose from the dead, and finally to become king in the north,” u/WhyDidTip writes.

Here’s the full prophecy from the Song of Ice and Fire books:

“When the sun rises in the west and sets in the east. When the seas go dry and mountains blow in the wind like leaves. When your womb quickens again, and you bear a living child. Then he will return, and not before.”

It could be the opposite. After all, the last part of Duur’s words sound a lot like Daenerys will have at least one child and Drogo will be able to live on because she’ll name the baby after him instead. That would fulfill a part of the prophecy. The mountains blowing in the wind like leaves could be in reference to the part of the wall falling at the end of Season 8, Episode 1, but that’s only one possibility.

In Season 7, Jon admitted to being skeptical of the Duur’s prophecy. “Has it occurred to you she might not have been a reliable source of information?” he asked. Season 7 also included a lot of discussion regarding Daenerys’ ability to have children, legacies, and successors to the Iron Throne. So there’s no way that it won’t come into play at some point.

Despite the possibility of the prophecy coming to fruition, a baby would certainly complicate an already complicated situation. However, with all the emphasis on children and the possible misunderstanding of the prophecy’s words, u/WhyDidTip suggests that Daenerys is already pregnant, though it comes at a time when she might see Jon as a threat to her claim of the Iron Throne.

To be fair, Daenerys hasn’t had a chance to really react to Jon’s news. After all, they have the Night King’s army to deal with first before they can get back to discussing prophecies, children, and who will ultimately get to rule over Westeros.