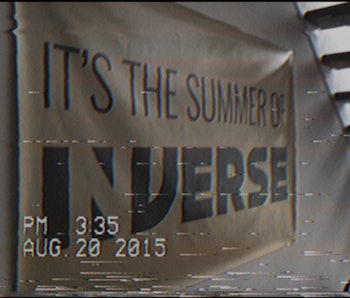 There aren’t many fathomable reasons to filter your crystal-clear smartphone’s camera to look like a messy, tracking-riddled VHS-style camcorder. For ‘90s parties, maybe. Or if you’re making a movie about a serial killer. Or you are a serial killer. But if you ever really wanted to just in general — then here you go, you weirdo.

A new app on the iTunes store makes your iPhone’s camera look like a retro camcorder. Developed by Rarevision, whose company name is extremely era-appropriate, the app is quickly catching on, and because curiosity is inherent to our species, we gave it a whirl.

I didn’t shoot video because the offices of Inverse are a euphoric playground only the privileged few may be granted to see in action, but using the aforementioned screenshot method you can see the HUD and exactly how things look through the filter below.

The frame rates, to most people, offer nothing but aesthetic differences, but for filmmakers wishing to insert cheaply-made “home movies” to their narrative films (which I imagine this will be the app’s most productive use), they’re extremely helpful in achieving the appropriate look.

But if you don’t give a damn about that stuff then this is basically one hell of a fun distraction. Instagram #TBT and ‘80s/‘90s party go-ers will go nuts, but I can’t shake off the feeling that this is telling where our priorities lie in our obsession with nostalgia: That it doesn’t matter what we did or how we lived, just how things looked.

More like this
Culture
Sep. 18, 2022
You need to watch the sexiest sci-fi thriller of all time on Amazon Prime ASAP
By Andy Crump
Innovation
Sep. 26, 2022
This sound-powered underwater camera could reveal deep-ocean secrets
By Molly Glick
Entertainment
Sep. 25, 2022
Knock at the Cabin trailer gets roasted online for one bizarre mistake
By Alex Welch
Related Tags
Share: