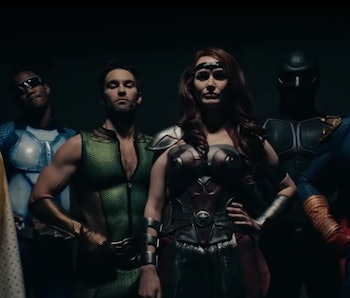 What happens when superheroes break bad? That’s one of the big questions driving the action on Amazon’s upcoming series The Boys, starring Karl Urban, Jack Quaid, and Elizabeth Shue. Superhero shows are nothing new to Amazon Prime Video (see: The Tick), nor are they uncommon on other streaming platforms, but Amazon Studios is looking to deliver something a little different to its Prime viewers, taking a page out of the playbooks of Watchmen and Preacher by envisioning a more grim and gritty superhero world adapted from another popular comic with adult themes.

With the series arriving at the peak of summer — July 26, to be precise — and the first trailer finally available to view, we thought it was about time we took at look at what we know so far. Keep reading for all the basics on The Boys.

When Is The Boys Release Date?

The Boys will be released on Amazon Prime Video on July 26. It’s unclear if all 8 episodes will be available to binge or if they’ll be released on a week-by-week basis, but considering it’s standard for Amazon to drop entire seasons into our laps in one go, we have a feeling it’s the former.

Is There a Trailer For The Boys?

Thankfully, yes, there is a trailer for this twisted and delightful superhero show. The first trailer for the upcoming series debuted on April 17 and gave viewers the first taste of this show. Watch it above if you haven’t already, but expect some graphic content in this uncensored teaser.

What Is the Plot of The Boys ?

The Boys is adapted from the [comic book series of the same name](https://en.wikipedia.org/wiki/TheBoys(comics) written by Garth Ennis (also known for Preacher). The story is set between 2006 and 2008 and imagines a world similar to ours but where superheroes also exist (pretty standard fare when it comes to the superhero genre).

However, The Boys isn’t a fun, light vision of life with superheroes. Instead, the superheroes in The Boys have gotten pretty high on the hog thanks to their celebrity status and a secret CIA agency known only as “The Boys” are often called in to wrangle them back into the do-gooders they’re supposed to be.

Based on what we’ve seen so far, the Amazon Studios adaptation sticks to this premise. The Boys will focus on a core group of superheroes known as The Seven and Vought, a powerful business conglomerate that oversees them. When The Seven become practically unmanageable as they go on more than a few dangerous power trips, “The Boys”, led by Billy Butcher (Karl Urban), are called in to, as he puts it in the trailer, “spank them” until they get their act together.

Much like the comics, The Boys will turn up the dial on violence, sex, drug use, and all manner of things worthy of being turned into a vice. Expect this show to be as explicit as it is fun and as much a parody of the superhero genre as it is its own original vision of the world of superheroes.

Who Is in the Cast of The Boys ?

Karl Urban will be leading The Boys team as Billy Butcher, with Jack Quaid playing Hughie. Other members of The Boys include: Laz Alonso (as Mother’s Milk), Tomer Capon (as Frenchie, known as The Frenchman), and Karen Fukuhara (as Female, known as The Female in the comics).

As for The Seven, Antony Starr will play The Homelander; Nathan Mitchell will play Black Noir; Dominique McElligott is taking on the role of Queen Maeve; Jessie Usher will play A-Train; Chace Crawford is on board as The Deep; and Erin Moriarty is Starlight.

Elizabeth Shue will also make an appearance in the series as a bigwig at Vought and Jennifer Esposito is set to appear, too, although it’s unknown who she will be playing. Oh, and keep an eye out for Simon Pegg, who is currently billed as “Hughie’s Dad”.

Are the Superheroes in The Boys Modeled After Other Popular Superheroes?

Even if you have a passing familiarity with comics, it’s easy to deduce the DC or Marvel Comics analogues for each of The Seven. As exhibited in the trailer, it looks like The Homelander (Starr) is based on cornfed superheroes like Captain America or Superman, trusty All-American types who are easy to root for. Although Black Noir has no analogue in the comics, the styling of his suit and his abilities — which include super strength — are giving us distinct Deadpool vibes. A-Train, with his incredible speed, is definitely meant to hearken back to The Flash, while Queen Maeve is distinctly positioned and styled in the trailer to recall Wonder Woman. The Deep, with his green vest and tendency to get wet (just watch the trailer and see for yourself), is most certainly the Aquaman of the group, and Starlight, despite not having an outright comics analogue, could easily have a roots in Captain Marvel or Supergirl.

The Boys premieres on Amazon Prime Video on July 26.