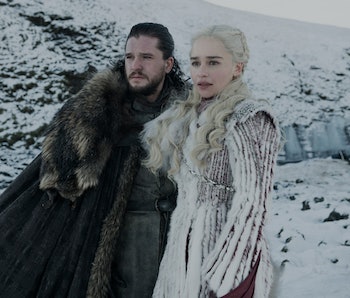 Game of Thrones Season 8’s big battle is set to take place as soon as the White Walkers arrive in Winterfell, which seems to be coming very soon based on what we know about Episode 2. So what happens if the good guys lose? They’ll need a backup plan. Somewhere to hide out where the Night King can’t follow. But where?

This is the precise concern addressed by redditor u/sbourwest in a recent post to the r/gottheories subreddit. Posted on April 17, sbourwest reminds us that The Eyrie is at least one prime location where humans can retreat to after the Battle of Winterfell — assuming that Winterfell is lost to the White Walkers or destroyed to the point that it’s uninhabitable.

“It occurred to me that no major battle in this series takes place in or around the Eyrie,” the write, “and it’s such a waste of a great stronghold, a nearly impregnable fortress situated atop an enormous stone spire only accessible by a narrow walk-way and three waycastles that guard the route up.”

It certainly makes sense that The Eyrie, a location that got plenty of airtime in Season 4 and which viewers know to be a solid hideout spot, could come back as an important hiding spot and fortress for the humans later in Season 8. But sbourwest’s observation also begs the question: Are any other strategic hiding spots for Daenerys, Jon Snow, and their army located in Westeros?

Here are five spots our heroes could take shelter assuming the Battle of Winterfell goes poorly.

Dorne is a solid hiding spot, but there are a few concerns. It would be easy for Jon and Daenerys to bring their army into Dorne in the sense that they would likely be welcome thanks to Varys and Tyrion’s dealings and alliances with the late Oberyn Martell and Ellaria Sand. Dorne is also relatively untouched by the conflicts that have taken place over the course of Game of Thrones, meaning supplies, food, and places to regroup would be plentiful.

That said, getting to Dorne would be a big risk for Daenerys and Jon since the nation is south of King’s Landing. Traveling in the vicinity of King’s Landing makes Daenerys, Jon, and their troops vulnerable to the Lannister army, who could be even more dangerous that the Night King’s army.

The other big drawback is that Dorne is connected to the rest of Westeros, meaning the White Walkers could reach it eventually.

Of course Daenerys’ home at Dragonstone would be a perfect hiding spot! First of all, it’s an island, meaning the aquaphobic White Walkers won’t be able to reach it, but that’s not the only reason.

Dragonstone provides the comforts Daenerys would find soothing and helpful when it comes to getting in the right frame of mind for planning an attack. Add to this the fact that there’s plenty of abandoned space to house her army as well as survivors from the Battle at Winterfell and the remaining stores of dragonglass available to mine for weapons, and Dragonstone remains a solid option for a hideout.

Lyanna Mormont is already an ally to House Stark and has prepared every Bear Island resident to fight the incoming White Walker army, so it makes sense that Bear Island could become a hiding spot for the humans. Much like Dragonstone and The Iron Islands (more on that below), finding a safe space on an island surrounded by water — a natural deterrent for the undead — is a key factor to consider. There plenty of space to regroup and re-strategize and literally everyone on the island is prepared to fight. Everyone wins.

We’ve only seen Greyjoy homestead The Iron Islands a few times in past seasons, but the location of the island chain has become a major talking point in Season 7 and in the Season 8 premiere.

Similar to the advantages of Bear Island, the Iron Islands are a natural choice given that Yara Greyjoy, the current leader of the ironborn, is already an ally to Daenerys and would readily open her home at Pyke to Daenerys’ army and dragons. Yara made that point clear to Theon in the Season 8 premiere, telling him she wants to sail back to the Iron Islands, regain control, and make it suitable just in case Daenerys and her allies need to escape to a safe spot. With the White Walkers unable to travel on or through the water, the notion of retreating to an island makes more and more sense.

Even if the humans don’t retreat to the Iron Islands in Season 8, we have a strong feeling we’ll be returning there at some point. Cersei has already hinted that she might go to the Iron Islands with Euron Greyjoy to wait out the coming destruction at the hands of the White Walkers, and Euron pretended to do just that in Season 7 during the summit where Jon gave proof of the White Walkers existence.

All this talk about the strategic advantage that the Iron Islands offer can’t be pointless, right?

Not only does redditor u/sbourwest point out that The Eyrie makes the most sense for a retreat should Winterfell fall to the White Walkers, but they also remind us that it makes sense because there are so few locations that would be hospitable to Jon Snow, Daenerys, their massive army, and two dragons. The reasons they lists on why it makes sense to hide out at The Eyrie are pretty convincing.

“There’s no trust of Cersei, particularly after Jaime Lannister spills the beans to Daenerys/Jon about her deception, they would not run to her,” they write, going on to reason that “The Eyrie is half the distance from Winterfell than King’s Landing is,” and that “It is situated at the same longitude as The Iron Islands, giving Theon/Yara a chance to have a more significant role.”

Additionally, the Season 8 premiere made it clear that with Jon relinquishing his title as King in the North and Sansa stepping in as the Lady of Winterfell and interim ruler in the North, the prominent leaders from the Vale will follow Sansa’s lead — though that could change now that Jon know’s his true identity.

Still, Sansa may be best equipped to bring Jon and Dany’s forces safely to The Eyrie. Not only does she have established familial ties to the Vale (her aunt, Lysa Arryn, was Lady Regent of the Vale) but she also has the loyalty from the armies of that region. So it’s not illogical to think that The Eyrie would be immediately offered up as a prime hiding spot for Jon and Daenerys’ army as they wait for the next White Walker attack.

Game of Thrones Season 8 airs Sundays at 9 p.m. on HBO.