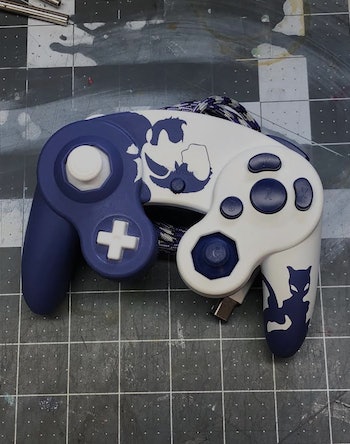 This year marks the 20th anniversary of the debut of Super Smash Bros., the video game series that places iconic Nintendo characters into an arena so they can beat the crap out of each other.

Smash Bros. became the basis for a deep-rooted community — one with its own fan-made docuseries — with a penchant for cutthroat competition. This past February, the GENESIS 6 video game tournament in Oakland, California attracted 1,113 contenders from around the world.

Even as Smash has evolved over the years — graduating from console to console and expanding from the original eight Nintendo characters to a roster of 74 — one piece of hardware associated with the game has remained constant and beloved. In a twist the designers behind the now 18-year-old device likely never saw coming: GameCube controllers continue selling on Ebay, sometimes for hundreds of dollars.

First released in 2001 with Nintendo’s cubical gaming system, the controller has had incredible staying power, even as Nintendo came out with newer consoles like the Wii, Wii U, and Switch. Its enduring relevance is peerless: PlayStation 2 and original Xbox controllers now gathering dust in closets, while GameCube controllers are still in the hands of professional Smash Bros. players, Reddit gadget modders, and nostalgia seekers like myself.

Nintendo originally offered four versions of the GameCube controller: indigo, jet black, spice orange, and indigo clear. They were all so well-received that the Japanese gaming company continued cranking out new GameCube controllers for every subsequent console release and Super Smash Bros. game launch. Today, there are 28 standard layout GameCube controllers in existence, as well as a handful of unique variants, like one with a built-in keyboard and another that’s shaped like a chainsaw. Collector Carl Synnett has acquired almost all of them.

Synnett is an avid contributor to the Custom GameCube Controller (CGCC) community on Discord, an online message board where enthusiasts for the controller chat about mods and show off their customized shells. For his part, Synnett has amassed a collection of 27 GameCube controllers which he estimates is worth roughly $2,000. As an unofficial GameCube controller historian, Synnett tells Inverse that the lasting popularity of the controller and the dedicated community around Super Smash Bros. Melee — the 2001 title that came out with the GameCube — are intrinsically tied.

“[The] controller is definitely one of the big reasons why Melee is still so big and Nintendo knows that — they made it compatible for their next three home consoles, and even made an adapter that can connect to PC,” he said. “Nintendo knows how good and popular it is, and it’s amazing they still support it almost 20 years after its launch.”

The GameCube controller is the rare piece of vintage piece of tech that never seems to die. In fact, it’s seen a revival, thanks to the December 2018 release of Super Smash Bros. Ultimate on the Nintendo Switch, which lets players use the original GameCube controller as long as they shell out for a $75 adapter.

“My siblings and I would stay up way too late on a Friday night all playing together and eating mac and cheese between [Mario Kart Double Dash] races. We would argue who was the best kart driver, but our words meant little compared to the outcome. I cherish those moments and we still sometimes try to re-create them, even through our packed schedules,” Redditor /u/TheLunarAegis tells Inverse.

In a sign of its own role in encouraging the GameCube controller’s renaissance, Nintendo even recently released a limited number of new GameCube controller circuit boards. This step allowed those who are willing to spend big bucks customize their controller however they want.

Controller Chaos is an online retailer that sells designer console accessories, and the minimum asking price for a GameCube controller is currently about $160. That can quickly cross the $200 mark, though, if a shopper wants specific button colors or a custom tag. Matthew Fosf, a customer representative for the site, tells Inverse that Super Smash Bros. Ultimate has revived interest in the 2001 tech.

“We tend to have a lot higher traffic once new [Smash Bros.] games come out, there’s a lot more interest,” he tells me. “While the competitive Smash community does tend to keep sales pretty steady throughout the year, we have had quite a bit higher sales since it was released. We were selling about one to two GameCube controllers a week on average, and it’s gone up ten fold minimum since the game’s announcement.”

For general Nintendo fans, it’s all about nostalgia, but for professional players, the GameCube controller layout is practically a required tool of the trade.

Samuel “Dabuz” Buzby is a 25-year-old American Smash player and a member of the professional esports organization, Team Liquid. He’s currently coming off of an impressive showing at the 2019 Smash Ultimate Summit, where he finished in second out of sixteen of the highest rated players in the world. In every match he played during the March tournament, he used his bright-orange GameCube controller.

It seems counterintuitive that a game controller designed in the ‘00s remains so superior to modern-day gaming tech in the eyes of some gamers, but Buzby explains that it’s specifically made to allow players to string together complex in-game combos. He personally uses the “claw grip,” an unorthodox way to hold a controller that lets players rest more of their fingers over buttons to allow for split-second inputs.

The positioning of the big-green A-button on the right side of the controller makes this grip slightly easier to pull off than with other controllers. It’s surrounded by the X and Y jump buttons, as well as a red B-button, giving Buzby and the professionals easy access to the most crucial buttons in the game in a tight area.

Below that is the C-Stick, which acts like a shortcut joystick that can be flicked in any direction to pull off quick attacks that would normally require interacting with the A-button. Players use it as an effective way to get out of dicey situations or to follow up a flurry of attacks with quick, successive hits.

“Most attacks involve the A-button,” Buzby tells Inverse. “The placement of it as a big button in the middle of every button, makes sliding to and from it very useful for quick movements. The C-Stick is small, easy to flick, and is positioned low on the controller making the claw grip easy to implement.”

“Customs are something I love making. This is my Mario inspired Wavebird [wireless GameCube controller]. While my first love are Game Boys, the Cube really was the best generation. Couple that with a Game Boy Player and you have the best of both worlds,” Redditor /u/kodychristian tells Inverse.

GameCube Controllers Used to Give Competitors an Edge

The professional scene’s preference for the GameCube controller goes even deeper, especially in the Melee community. The 2001 title is still played competitively to this day by a committed few that have spent the past 18 years mastering the now-vintage game. That includes learning how to use baked-in glitches to their advantage.

The nearly two-decade old game and controllers interact in a peculiar way, allowing the most skilled players to exploit slight in-game bugs to move their character in ways that shouldn’t be possible. Exploits like these could be patched by a software update in modern-day games, but as a physical cartridge with no online support, Melee remains unpatchable in this day and age. At the highest level of play, learning to exploit these glitches is paramount.

One major quirk is something called a “snapback.”

When you let go of the analog stick, there’s a little bit of a bounce that happens when the controller goes back and forth,” explained Fosf. “Modern-day controllers tend to have capacitors that actually lower the input from those so it doesn’t cause it, but GameCube controllers could actually cause your character to turn around.”

Nintendo fixed the joystick issue with these controllers starting in 2004, but leaving desperate Melee players to dish out hundreds for 2001 tech or risk losing tournaments.

In 2017, Adam “Armada” Lindgren — considered to be one of the “five gods” of competitive Super Smash Bros. Melee — had to drop out of a tournament because his controller wasn’t executing its snapback properly. Kadano, a tech data enthusiast known online only by his pseudonym explained that players like Lindgren need to be playing with increasingly rarer controllers to be able to compete.

This remains a problem for Melee players today, but does not affect anyone playing Super Smash Bros. Ultimate or any of the Smash games that came after Melee. Still, professional players like Buzby continue using the new GameCube controllers, in part because that’s what they grew up with. The vintage controller’s dominance in the scene, then, could still soon be eclipsed by variations of the newer controllers being used by younger players.

Buzby noted that Sota “Zackray” Okada — a 17-year-old Japanese Smash wunderkind — uses the Nintendo Pro Controller, which was released in 2017 and looks a lot like an Xbox One controller. It’s a matter of preference for players, and to some of a certain age, selecting a GameCube controller has a lot to do with nostalgia.

“Been playing Phantasy Star Online since 2003, just got this for my 33rd birthday,” Redditor /u/srsly_warchild tells Inverse.

When I bought my white GameCube controller on March 18, I didn’t have tournament competition in mind. My roommate told me he was getting one to step up his game, and I followed suit to try to recapture that same blissful feeling I had battling the Master Hand alongside my childhood friend in 2002. And the feeling is shared by a large portion of the 20,600 subscribers of the /r/Gamecube subreddit.

These online communities are home to Nintendo fans posting pictures of their tricked-out GameCube controllers, consoles, and game collections. This side of the internet isn’t just united by the Super Smash Bros. series though; instead, the Nintendo fans gather here to relive their childhood memories, forum moderator Rob Vinciguerra tells Inverse.

“New game releases do not seem to have affected our traffic,” he said. “Right now, you have a lot of people who were kids when [the GameCube] came out, who are now adults. That’s what’s driving our subreddit. It’s a Nintendo console controller. People have great nostalgia for it.”

Vinciguerra is a game collector who owns more than 100 consoles and triple the number of controllers. He’s less convinced that the GameCube controller is Nintendo’s magnum opus.

The GameCube controller is uniquely designed compared to its counterparts. It has an uneven number of shoulder buttons and two completely different joysticks.

“The controller itself has a lot of flaws,” said Vinciguerra. “The awkward cluster of buttons, two analog sticks that feel different from each other, and only one shoulder button. There’s a reason why Nintendo abandoned the design and why no one else followed it. It’s just too short of perfect.”

Nintendo has never released a different iteration of the GameCube controller. There have never been any design updates and it will likely stay that way. Meanwhile, Super Smash Bros. professionals will continue using them until their circuit boards wear out and nostalgia-chasers like me will continue to relive their childhood with an imperfect, unique video game controller.