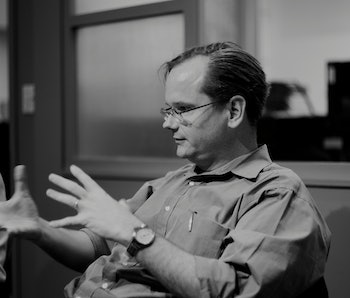 Lawrence Lessig’s presidency would be, if it came to that, an act of patriotic seppuku. Lessig, after all, is no politician — in fact he’s the closest thing to the opposite of a politician, a guy with a clear non-negotiable goal. What does the Harvard University law professor want? To rejigger political districts so voters aren’t given geographically undue weight and to enacting campaign finance reform. When does he want to do that? Early 2016 would suit him just fine. His campaign platform, such as it is, consists of those two policy solutions and the promise to resign after accomplishing those goals and hand over the presidential reins to the next Democratic woman (or maybe man?) in line.

That changing the way money is wielded in campaigns is so toxic it has formed an unlikely duet this political season: Lessig might not see eye-to-eye with Donald Trump about much, but he applauds Trump’s wildcard willingness to talk about campaign finance reform. Trump’s execution, in practice, maybe not so much — but the Donald is a household name, whereas Larry never hosted a reality TV show. So who is Lawrence Lessig? Here he is, by the numbers:

$5 million: The amount of money Lessig raised to start the super-pac Mayday in 2014 in order to help support finance-reform candidates.

$1 million: Amount of cash Lessig says his campaign must raise by Labor Day. If he doesn’t hit that number — and this really is a Kickstarter campaign at its core — he’ll refund donors and head back to Cambridge.

306: Pages in his free-to-download book, Free Culture, in which he explains that the expanded powers of copyrights have decreased the freedom of our culture. In the book, he also forecasts that a deal between DreamWorks and Mike Myers to splice the comedian into old movies is a good idea. Given that it came out a half decade before The Love Guru, you’ve got to be impressed with the man’s ability to extrapolate.

13: How many years Creative Commons, the free-to-public copyright licence Lawrence Lessig helped create, has been around.

6: The number of spaces Bernie Sanders moved up campaign finance reform on his platform (to #2), which Lessig says is his influence.

Very small number: The odds of Lessig pulling this presidential campaign thing off. The end of gerrymandering is, admittedly, not a sexy pitch, and the idea that a president would purposefully resign after just a few days is (and Lessig would probably agree) a rather oddly-shaped pill for the American public to swallow. But as one scruffy-lookin’ nerf-herder once said, never tell me the odds.