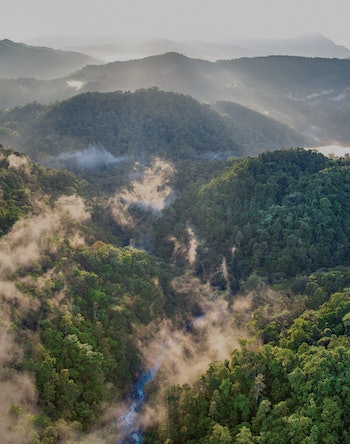 Reprinted with permission from *Our Planet* by Alastair Fothergill, Keith Scholey, and Fred Pearce, © copyright 2019. Published by Ten Speed Press, a division of Penguin Random House, LLC.
Sarah Sloat
3.28.2019 11:00 AM

Sir David Attenborough is serious about protecting Earth. The famously smooth-voiced naturalist is so serious, that he’s lending Netflix his narration star power for Our Planet — a decision that the BBC stalwart made in part because of the platform’s massive audience. Attenborough is trying to reach the world because his message is an important one: The natural world is in danger and its survival depends on our willingness to help.

A companion book to the eight-part documentary series will be published on April 2 and the show will be released on April 5. In the introduction to the book, Attenborough lays out exactly what is at stake:

These changes are as rapid and as great as when the planet was struck by an asteroid. But this time they result from the global impact of our own species. In just four decades, the number of wild animals has halved, and biodiversity is declining in every region of the world, all a consequence of the way we have chosen to live. It is a global catastrophe.

That’s the bad news. The good news is that humans are capable of creating technology and deploying policy initiatives that can help restore the planet. The amazing news is how resilient the natural world is.

That resilience is the centerpiece of Our Planet. Alongside scenes of natural beauty — massive penguin colonies and crocodiles guarding their droves of hatchlings — are examples of tigers navigating exploited forests and the remaining whales whose ancestors survived the humans who hunted them. The book and the series are presented as a call to action: Humans have made this planet a mess and while natural life survives, merely watching that fight for survival unfold makes us a complicit witness.

At the same time, the act of watching is what Our Planet is encouraging — albeit, a different type, of watching. Its creators want the viewers to watch, think, then act. In Attenborough’s foreword, he reminisces on the first photographs of Earth taken from space. Those, he argues, put our lives into perspective and forced the realization that we are a vulnerable dot in space. The hope is that a presentation of the natural world — in all its glory, in all its danger — will inspire a similar forced perspective.

Until you can enjoy Our Planet from home, please enjoy these scenes below:

A bowhead whale and her calf surface in the Arctic Ocean ice off the northern coast of Alaska.

A colony of pelicans sit in Lake Eyre.

An Adélie penguin shoots out of the sea — it’s best shot at avoiding a leopard seal on the hunt.

A stretch of rainforest in Tawau Hills National Park, on the island of Borneo.

A blue shark drifts. These are the most abundant sharks in the ocean, but also the most heavily fished.

A shy brown bear peeks out from a tree in Slovenia.

Our Planet is out on Netflix April 5. Check out the trailer below: