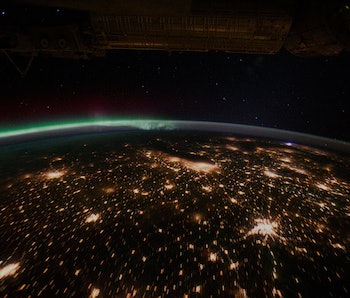 Our planet is bookended by two cosmic displays that spread around the poles, the aurora borealis and the aurora australis. To see these natural displays of light, people must usually journey extremely far north or south, to places like Antarctica, Iceland, or Alaska. But sometimes geomagnetic storms temporarily disturb the Earth’s magnetosphere, giving people in less remote places a chance to see a dazzling light show. This Saturday could be one of those rare moments for some Americans.

According to the National Oceanic and Atmospheric Administration, parts of the US could see auroras this Saturday night because of geomagnetic storms. NOAA issued a moderate geomagnetic storm watch for areas poleward of 55 degrees geomagnetic latitude, which means that auroras may be seen between New York and Wisconsin, and across to Washington State.

Doug Biesecker, Ph.D., a physicist with the Space Weather Prediction Center in Boulder, Colorado, tells Inverse that the best places to see the aurora will likely be upstate New York, Minnesota, Montana, and North Dakota. To see the lights, it’s best to look after 10 pm and ideal to take a look after midnight.

Of course, not all potential aurora viewing spots are made equal. While it’s true that everyone must look northward to catch a look, whether you’ll see it depends on three main factors. One is the local weather; Biesecker says that if it’s overcast, there’s no point in looking. Another factor to consider is the brightness of the moon, which is unfortunate for hopeful viewers this weekend. “This one kind of stinks because we have a full moon,” Biesecker admits.

But the most important factor to consider is how active the storm is. Geomagnetic storms occur when Earth’s magnetosphere is disturbed by an exchange of energy from the solar wind into the space environment around our planet. Generally, geomagnetic storms are happening on some level all of the time, says Biesecker. The stronger storms — the sort that NOAA puts on the scale — happen less frequently and are linked to coronal mass ejections from the sun, which are plumes of plasma embedded within the sun’s magnetic field that are released with the solar wind. The geomagnetic storm expected to strike this weekend is ranked a two on a five-point scale.

“Coronal mass ejections arrive from the sun generally in association with solar flares, and these travel at a typical speed of about a million miles per hour,” Biesecker says. “But it’s 93 million miles to Earth, so that gives you a long time before it arrives.”

The coronal mass ejection associated with the storm hitting tomorrow erupted on the sun on March 20. A nice side effect of the storm is that it amplifies the Earth’s auroras, making them visible at lower latitudes than normal. Auroras are a result of the interaction between solar winds and the particles in the Earth’s atmosphere.

When electrons from space mix with the oxygen and nitrogen gas in our atmosphere, the elements emit enough light for the eye to detect them. We can’t see the light during the day, but at night, waves of different colors emerge from the different gases that are excited. Oxygen emits a greenish-yellow light, and nitrogen gives off blue.

Saturday’s show over the US won’t be the best display of auroras that the country has ever seen, but the fact that we might see anything is exciting because we’re in a period of time when we shouldn’t be able to see much at all. Earth is currently in the low point of the solar minimum, a point in time occurring every 11 years when sunspot activity slows down and the massive star takes a relative break with its solar flares.

“We’ll have more of these storms at the time of solar maximum,” Biesecker explains. “So the fact that this is happening at all is something worth talking about.”

More like this
Science
Sep. 12, 2022
Harvest Moon 2022: 10 incredible views of this weekend's lunar event
By Jennifer Walter
Science
Sep. 23, 2022
Artemis I Moon launch may be delayed again — and NASA can't do anything about it
By Doris Elín Urrutia
Science
Sep. 24, 2022
Mars once had glaciers — but low gravity made them weirder than anything we know
By Matt Williams and Universe Today
Related Tags
Share: