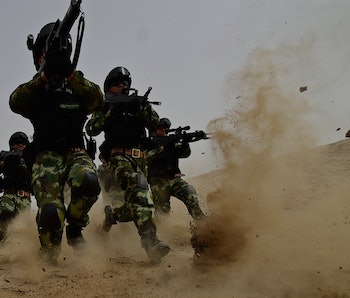 The future of warfare is not in the trenches, or the sea, but, apparently, with low orbit spacecrafts and smart underwear.

The military has started sponsoring research into special biometric trackers and sensors built directly into your briefs. Sherbit notes that past attempts at military wearables were shrugged off as cumbersome and uncomfortable, but, to steal a tired old ad line, in this case nothing else feels so right. Underwear is versatile enough to wear into any combat zone.

There are a couple projects working towards the goal of a better equipped soldier, but the most interesting is with nanotechnology engineers at the University of California, San Diego. Working with a sponsorship from the U.S. Office of Naval Research, they’re developing chemical sensors that can be printed within the elastic underwear band to collect sweat. Besides being equipped with “hospital-on-a-chip” systems to diagnose injuries and administer drugs, they can also use those sweat samples to analyze chemical levels in the body.

The UCSD researchers used a screen printer to create an array of patterned cells in carbon-based ink on the elastic interior of ordinary underwear purchased from a local department store. The ink patterns function as electrodes, creating a surface across which electrons can travel; this electrical activity can then be analyzed to detect specific ions based on changes in current. The scientists were challenged with designing a system that could survive extensive folding or stretching — bound to occur over the course of daily clothing use — and their experiments studied the effects of mechanical stress on the accuracy of the sensors. In stress-testing trials involving detection of hydrogen peroxide and NADH, two key biometric indicators, they observed minimal negative effects on the sensors’ accuracy. These skivvies have your chemistry down pat.

The military has been interested in upgrading its unmentionables since at least 2012, but success stories have yet to appear. When something is important, you take the time to get it right.

More like this
Mind and Body
6.30.2022 11:00 AM
Male birth control is at our fingertips. Will we ever grasp it?
By Elana Spivack
Science
6.28.2022 10:00 AM
How are drugs absorbed in the body? The science of medicine, explained
By Tom Anchordoquy and The Conversation
Mind and Body
21 hours ago
Monkeypox: 4 charts predict how the outbreak will end
By Adam Kleczkowski and The Conversation
Related Tags
Share: