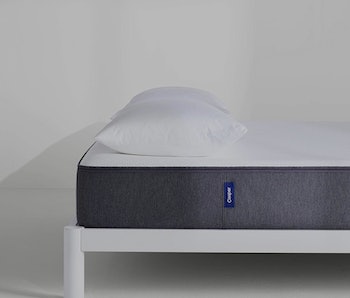 I recently came to realize that I slept better when traveling for work than when I was at home—a telltale sign that it might be time to try a new mattress. For the past several years, For the past several years, I’d been sleeping on a mattress that was hard as a rock, and more damningly, had been purchased second-hand at a time when I had apparently chosen to throw caution, fear of bedbugs, and according to my girlfriend, “anything resembling standards” to the wind. A memory foam mattress that I had slept on during a work trip had really impressed me—as in, I woke up without my back hurting in three places for once—and this made consider a Casper, which several friends had recommended.

Broadly speaking, mattresses fall into three categories: traditional spring, memory foam, and hybrids that incorporate aspects of both. The Casper Original mattress is a memory foam mattress, made famous by its simple delivery, whimsical subway ads, and impressively long home trial period. Made of four layers of breathable memory foam, the Casper introduced what the company calls “zoned support”—a layer that is firmer under the hips for better support and spinal alignment.

Delivery of the Casper mattress was both impressively simple while also seeming to defy physics. The mattress was delivered by UPS and arrived impossibly compressed into a box that seemed like it could hold only a small fraction of a bed. Once I clipped the plastic wrapper over the mattress, the mattress frantically unpacked itself while I worked to get it into the right position on my bed frame.

Because experts say it can take up to a month to switch mattresses, I thought that transitioning from the rock-hard spring mattress I had been sleeping on to the Casper would take a while. It didn’t. As a side sleeper, the Casper’s foam structure allowed me to easily find a more comfortable, natural sleeping position pretty much straight away, something the memory foam is supposed to do for most sleep positions.

My quality of sleep on the Casper was even better than on my work trips, and I didn’t experience the back soreness that I had at home with my previous mattress. One concern that often comes up with memory foam mattresses is that they tend to sleep hotter than traditional spring mattresses, which I was a little concerned about, but Casper uses breathable foam to avoid this issue, and any increase in sleeping temperature that I experienced was marginal, if there was any at all. Similarly, some people feel that the Casper doesn’t provide that added “spring” for, ahem, bedroom extracurriculars (read: sex), but I’m just going to go ahead and call this one like I see it: If you really need that extra tiny extra push from your mattress, you should probably just hit the gym instead of worrying about mattress materials. Sorry/not sorry.

In all, my Casper mattress has been living up to friends’ recommendations for my back, and perhaps more impressively, has made my audibly girlfriend less annoyed with staying over at my place. Relatedly, I’ve found it’s also great if you share your bed with a particularly active sleeper (not shaming her here—I can toss and turn at night, too). IMO, this is a great choice if you’re looking sleep easy with how you spent that tax refund this year.

More like this
Mind and Body
7.31.2022 2:00 PM
Four science-backed methods to feel less tired during the day
By Sarah Sloat
Innovation
8.12.2022 9:30 AM
Indoor lights make us sick — this technology could fix that
By Miriam Fauzia
Mind and Body
8.14.2022 11:00 AM
Wastewater surveillance helped us track Covid-19. Can it work for monkeypox?
By Mark Kreidler and Kaiser Health News
Related Tags
Share: