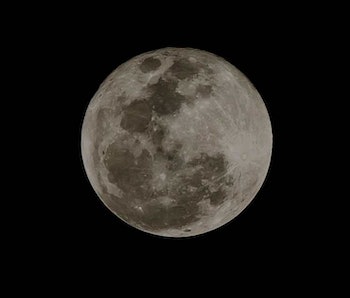 March 20 is the first day of spring, and one of only two days per year when the sun shines directly on the Earth’s equator, signaling the end of a long, dark winter. That’s satisfying enough on its own, but the 2019 spring equinox will also coincide with more than one event that makes the occasion a bit more festive.

On it’s own, the equinox is a predictably biannual event when there are exactly 12 hours of daylight and 12 hours of darkness pretty much everywhere on earth. That moment in the United States happens at 5:58 p.m. Eastern today, Wednesday, March 20.

So while the equinox itself is a worthwhile celestial event, it’s not the only cool thing happening in space today.

After you step outside at two minutes ‘til 6 p.m. Eastern to mark the sun passing directly over the equator, it might be worth venturing outside a second time after dark. Tonight, the Super Worm Moon actually coincides with the first evening of spring.

The moon is considered “super” because it will be slightly closer to Earth than it usually is — which makes it look bigger in the sky. Technically, this is called a perigee, but the phrase super just seems to have more sticking power.

This super moon, however, has the added bonus of also occurring on the spring equinox which means it gets a different name: the Super Worm Moon. The last time a Super Worm Moon happened, according to the Old Farmer’s Almanac, was 1981.

If super moon events seem passé, tonight is even more thrilling. It will be the last super moon of 2019, following ones in January and February. But if you’ve missed the earlier ones, this is the last chance for this year. The next super moon event will be February 9, 2020.

At 118 UTC this morning (or 9:38 p.m. Eastern Time last night), NOAA’s Space Weather service also reported a small solar flare. Solar flares typically happen when there are changes in the sun’s magnetic field, called the corona. All of the sudden, these shifts can cause the sun to release a lot of magnetic energy all at once, which causes a big, bright flare.

While very large solar flares can impact things like GPS systems here on Earth, many are very small, don’t actually cause any damage. But one reason that the NOAA is pointing out the one that happened last night was that it may have been accompanied by a coronal mass ejection or a CME — which is when so much magnetic energy is released that some of the plasma from inside the sun actually comes with it. Then it rains back down upon the star in a firey hellstorm.

Right now, the NOAA Space weather service hasn’t confirmed the CME, but is looking into it.

More like this
Science
16 hours ago
Is my dog depressed or happy? Pet experts explain how you can tell.
By Tara Yarlagadda
Science
14 hours ago
You need to see Saturn at its closest and brightest this week
By Joseph Malcomson
Science
12 hours ago
Aliens could move entire planets to send a math-based code to other civilizations
By Kiona Smith
Share: