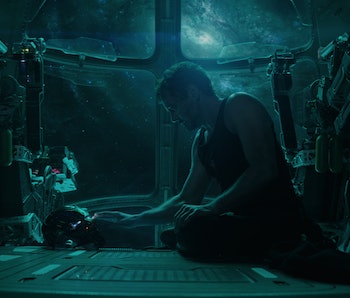 Tony Stark may have dreamt of his and Pepper Potts’ daughter in Avengers: Infinity War, but a new theory posits he’s been dreaming about the future as far back as Captain America: Civil War. Tony’s vision was preying on his fears of losing his friends and not doing enough to save the world, but the dream may have actually been foreshadowing Avengers: Endgame.

Tony’s vision included Captain America, beaten down, bleeding, and exhausted, asking him why he didn’t do enough to stop the deaths of the Avengers and the destruction around them.

The scene was thought to have been about Civil War, but now that several Avengers have died and half of Earth’s population has been dusted, Tony’s vision may have been alluding to future events in Endgame.

The theory comes from redditor u/sidthejar99, who suggests that Tony may have had the vision because he was inside the portal during The Avengers, implying it’s then that he first saw the “endgame” he mentions in Avengers: Age of Ultron.

“What Stark saw at the time when he flew into the portal to rescue New York City from a nuclear projectile was the same vision he later had in Age of Ultron. The difference being that in the vision he was in it rather than watching like a spectator from afar. Both scenes take place beyond the portal,” writes u/sidthejar99.

The theory argues that the vision couldn’t have possibly been about the events of Civil War because they included Hulk and Thor, both of whom were off-world and missing in action during the film. It makes sense that the dream-like sequence would be about Endgame since we’ve already witnessed the defeat of the Avengers at the hands (or Snap) of Thanos.

The ability to see these visions seems to be tied into the fact that Iron Man was the only one to have flown into the alien portal. After all, the “endgame” Tony saw was ultimately the reason behind Ultron’s creation.

In Infinity War, Doctor Strange also mentions an endgame, and he’s the only other person besides Tony who does. Given that Doctor Strange’s powers allow him to see various versions of the future, that can’t be a coincidence.

Theories regarding Tony’s abilities to see into the future or into different timelines aren’t new, though how and why he has them has never actually been confirmed onscreen. Whether or not Tony’s vision will come true the way he saw it is unclear, but it’s all the more reason for Tony to reunite with the Avengers and defeat Thanos once and for all.