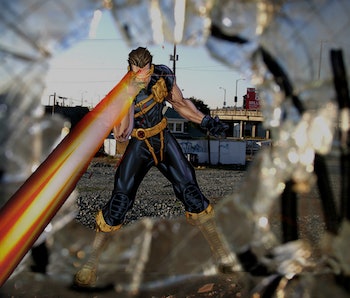 For a pair of small, goopy organs, the eyes get a lot of love. And for good reason: We communicate subconsciously with dilations in our pupils and consciously with long sexy gazes that can indicate all manner of intention. In myths and parables and fiction, the eyes have profound significance — also, lasers.

There are hundreds of variations of eye-lasers, heat rays, and other beams of power, and almost as many explanations for why such super powers exist (lamentably, few authors dwell on the lesser-known power of singe-proof lashes). The eyes are an appealing font from which destructive forces can spring: They are close to the brain, affording a nice hand-wavey means for some sort of mental buildup and discharge. You can also aim them better than a nose- or ear-beam, and they’re probably more hygienic than fire breath. And they have a rich history. The precursor to eye lasers came long before we were aware lasing was a thing:

Ancient Egypt: Falcon-headed god Horus has the sun for his right eye. Don’t try to fall in love with him via psychological test — or ancient Greece’s Medusa and ancient Europe’s basilisks for that matter.

Fourth century: Bodhidharma, a Buddhist monk known as the Blue-eyed Barbarian, spends nine years drilling holes in a monastery wall with his stares, because there’s nothing that gets you to a state of zen like dicking your friends out of their security deposit.

Sixteenth century: In the classical Chinese epic Journey to the West, our heroes encounter the Hundred Eyed Demon Lord, aka the Many-Eyed Fiend, which is a centipede-like critter with golden beams that shoot out of his demon eyes.

1938: Enter Superman. His early x-ray vision would evolve into heat-vision, the result of pent-up solar energy, and, in Smallville, pent-up teen hormones:

1951: Gort, the robot from The Day the Earth Stood Still, has a visor beam-weapon, way before Scott Summers tried to make destructive visors happen.

1963: Cyclops delivers his first concussive optic blasts. Like everything in the X-Men universe, there’s a convoluted story to explain a fairly straightforward power. From the Marvel Directory:

Cyclops possesses the mutant ability to project a beam of concussive, ruby-colored force from his eyes. Cyclops’s eyes are no longer the complex organic jelly that utilizes the visible spectrum of light to see the world around it. Instead, they are inter-dimensional apertures between this universe and another, non-Einsteinium universe, where physical laws as we know them do not pertain. This non-Einsteinium universe is filled with particles that resemble photons, yet they interact with this universe’s particles by transferring kinetic energy in the form of gravitons (the particle of gravitation). These particles generate great, directional concussive force when they interact with the objects of this universe.

1972: Ur-mecha Mazinger Z is born on the pages of the manga Weekly Shōnen Jump, and robots would never be the same — a giant robot without some sort of eye energy-beam weapon is like a ninja without his throwing star.

1999: The Iron Giant has the twin ocular superpowers of laser robot eyes and making us cry.

2012: Imagine Dragons takes a break from thinking about wyverns to imagine a teddy bear with laser buttons for eyes.