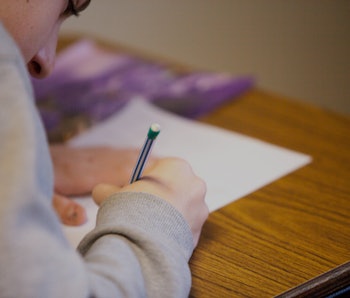 FBI prosecutors announced on Tuesday morning that they’d begun making arrests in relation to “Operation Varsity Blues,” the largest college cheating scam ever prosecuted by the Department of Justice. Fifty participants have been arrested thus far, including two SAT/ACT administrators, nine college coaches, 33 parents, and not one but two celebrities whose claims to fame nostalgically evoke the ‘90s.

So, to echo what we’re sure is going through your mind right now: How the hell did this happen, and why didn’t these parents just endow a building like a normal rich person with a dim college-aged kid? The answer is as complex and intricate as a scrambled paragraph in a story which instantly captured the internet’s attention.

Just like the Fyre Fest story — which dominated the news cycle for so long it inspired two competing documentaries to drop within a week of one another — the college scam story has everything. Instead of Ja Rule, we have Full House star Lori Loughlin, and instead of rich, stupid 20-somethings, we have rich, stupid teens and their accommodating parents. And instead of Billy McFarland, we have William “Rick” Singer.

Who Is William “Rick” Singer?

At the heart of the cheating scandal is Singer, a college counselor who ran an organization called the Key Foundation. Between 2011 and 2018, Singer helped the offspring of hyper-wealthy parents gain admission to some of the country’s top schools, including Yale, Georgetown, Stanford, and the University of Southern California, through a three-pronged cheating scam.

In some cases, Singer paid someone to take online classes as the students to boost their GPAs. In others, Singer had the students’ SAT and ACT scores corrected — or had the tests taken by another person entirely. But in what was inarguably the most absurd move of the three, Singer often passed off students as athletic recruits, doctoring photos, forging records, and bribing coaches to “sell” the admissions office on these fake athletes. Singer ultimately laundered over $25 million dollars through his fake charity, advising parents to designate their payments to him as tax deductible.

“Everyone charged here had a role in fostering a culture of corruption and greed,” said prosecutors at the Boston press conference Tuesday morning. “They flaunted their wealth to cheat the system to set their children up with the best education money could buy — literally.”

How Much Did the College Scam Cost?

In exchange for Singers’ “advice,” parents paid between $15,000 and $6.5 million for their children to nab an acceptance letter from an elite college; the average cost was between $250,000 and $400,000 per student. Singer reportedly urged parents to take their children to a therapist so they could gain a learning disability or test anxiety diagnosis, which would then allow them to take the SATs and ACTs alone, and with extra time. A number of college coaches, including the head coach for the Yale women’s soccer team and a head sailing coach have been indicted as well, for filling their allotted recruitment slots with students who had no intention of actually playing the sport (some never played, while others claimed an injury at the start of the season).

No students have been charged yet, says the FBI, and that’s intentional, as the levels of student participation varied from “completely in the dark” to getting on conference calls with their dad and Singer to discuss the sordid details. The FBI has also left the question of continued enrollment to the schools, meaning some of these kids may wind up staying where they are. But as the indictment documents, which name a number of famous defendants, including both Loughlin and actress Felicity Huffman, have now been made public, folks have quickly turned to social media to suss out those currently enrolled under false pretenses.

At least one of the students, Lori Loughlin’s daughter, Olivia Giannulli, has already begun fielding criticisms on her Instagram and YouTube pages, where she collectively has over 3 million followers. Giannulli, whose parents paid Singer $500,000 to pass both her and her sister off as “crew recruits,” going as far as taking photos of them on rowing machines, came under fire last August for saying she “didn’t really care about school,” and that she was primarily interested in “game days” and “partying.”

Prosecutors say the year-long investigation, nicknamed “Operation Varsity Blues,” is ongoing. The current charges only reflect the clients whose children were recently enrolled. Prosecutors says the total number of students who gained admission to top colleges through the scam has yet to be determined.